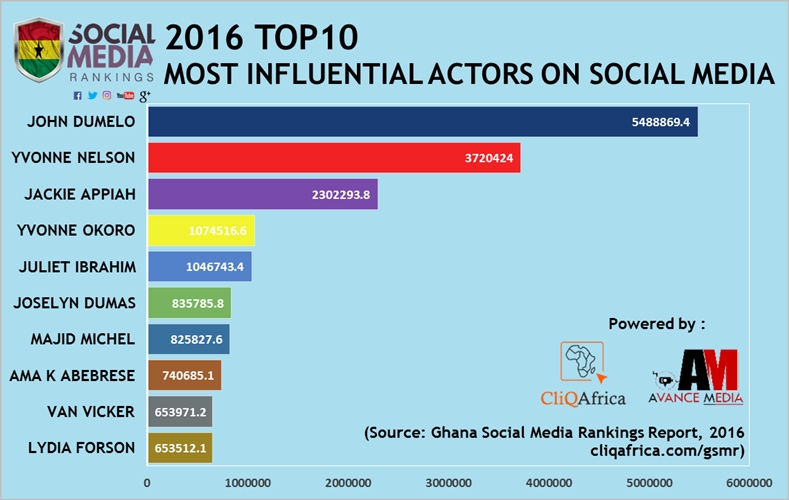 Reports from the 2016 Ghana Social Media Report has ranked Actor John Dumelo with the highest influence on Social Media in 2016.

John Dumelo who beat 2015 frontrunner, Yvonne Nelson, in 2016 also gathered new followings of over 3.2 million across Facebook, Twitter and Instagram, social media accounts which were considered for the 2016 ranking.

Even though Yvonne Nelson gathered, over 3.7 million new followers in 2016, John Dumelo’s engagement across the platforms surpassed that of any Ghanaian in the acting industry. His 2016 political activity could also be attributed to his rise to the top of the list.

Actors Majid Michael & Van Vicker also made their first entry on the ranking of the 2016 Most Influential Actors on Social Media.

Full report of the 2016 Ghana Social Media Rankings are available on www.cliqafrica.com/gsmr

Below are the 2016 Top 10 Most Influential Actors and Actress on Social Media:

With appraisal to the 2015 Rankings, Yvonne Nelson, Juliet Ibrahim and Ama K Abebrese dropped from 1, 3 and 7 positions to 2, 5 and 8 respectively.

Other actors who have the potential of making the next ranking include; Nadia Buari, Nana Ama McBrown, Emelia Brobbey and Abraham Attah.

The ranking which was based on the GSMR Score was analysed from their Social Media followings, Growth Difference, Engagements, Post Reaches and Mentions.