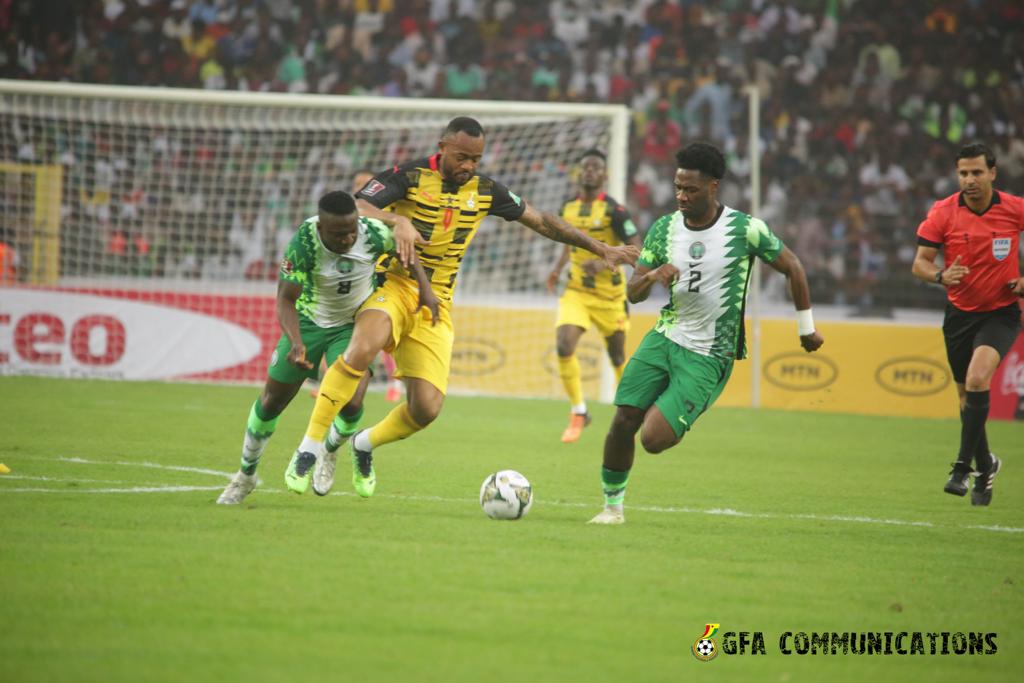 The Black Stars of Ghana have qualified for the 2022 Fifa World Cup after holding Nigeria to a 1-1 draw in the second leg of their final qualifying tie.

A crucial goal in Abuja was enough to seal Otto Addo’s men qualification for the global showpiece in Qatar.

The Black Stars held the three-time African champions to a goalless draw in Kumasi on Friday, and they scored an away goal in Abuja to advance to Qatar.

Nigeria coach Augustine Eguavoen made five changes to the team that played in Kumasi last Friday while his Ghana counterpart Otto Addo stuck to an unchanged XI.

It was an action-packed first 45 minutes at the Moshood Abiola National Stadium with Francis Uzoho making a huge error that led to Ghana’s opening goal in the 10th minute.

Arsenal’s Thomas Partey fired a powerful shot from outside the penalty area and it sneaked under the Omonia Nicosia shot-stopper and into the back of the net.

Nigeria responded immediately to the first goal and they got a penalty in the 19th minute after Ademola Lookman was brought down by Dennis Odoi.

The Tunisian referee initially waved off the foul but it was overturned after a VAR review.

Captain William Troost-Ekong stepped up to take the penalty which he converted to get Augustine Eguavoen’s side level.

Four minutes after the half-hour mark, Osimhen had the ball in the back of the net after connecting to a through-ball from Leon Balogun but it was ruled out for offside by the VAR.

The second half started on a bright note for the Super Eagles with Abdullahi Shehu replacing Onyeka but they struggled to break down a solid Black Stars defence.

Moses Simon was introduced in the 61st minute for Lookman while Ahmed Musa and Odion Ighalo replaced Oghenekaro Etebo and Emmanuel Dennis, respectively, in the 78th minute.

Osimhen put Ghana’s defence on their toes but his backheel attempts on two occasions could not beat goalkeeper Joe Wollacott.

The Black Stars defended their advantage while Almeria striker Umar Sadiq was also thrown into the fray in the final six minutes but he could not change the outcome of the game for the Super Eagles..

Ghana will now make their fourth appearance on the World Cup stage, a first since 2014 while the Super Eagles will have to wait for their seventh appearance.