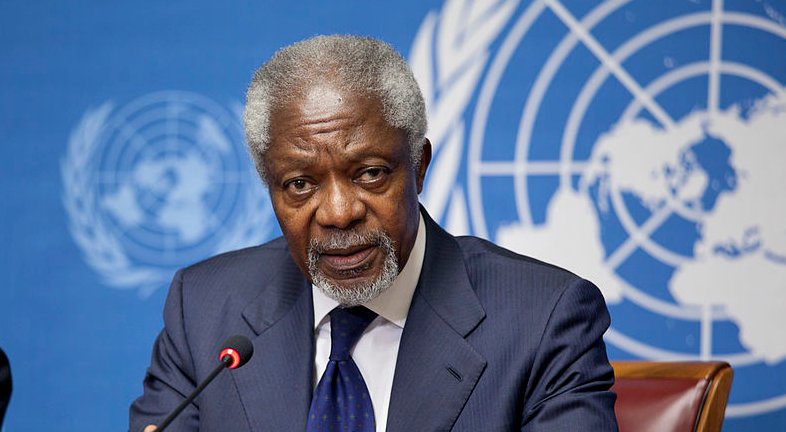 Delta State Governor, Senator Ifeanyi Okowa on Saturday extended his heartfelt condolences to the Kofi Annan family, the United Nations, the government and people of the Republic of Ghana on the demise of former United Nations Secretary-General, Mr Kofi Atta Annan.

In a condolence message signed by his Chief Press Secretary, Charles Aniagwu, Governor Okowa described the death of the 2001 Nobel Peace Prize for humanitarian work winner as “a great loss to the international community where he led efforts to finding peaceful solution to conflicts globally”.

According to the statement, “We have lost a global statesman who was deeply committed to global peace and conflict resolution. The highly revered diplomat will be long remembered for his towering role and dedication to improving lives through peaceful coexistence among people of diverse race.

“Mr Annan was bold and fearless as Secretary-General and told truth to power which led to his declaration of American invasion of Iraq in 2003 as “illegal” under international law. As UN Special Envoy to Syria, he proposed a six-point plan, that would have led to the early resolution of the crisis in Syria which was however not implemented by the Syrian government which led to his resignation as Special Envoy.

The Governor noted that Mr Annan touched lives with his Kofi Annan Foundation that was committed to overcome threats to peace, development and human rights around the world.

“On behalf of the government and people of Delta State, Governor Okowa extols Mr Annan’s extraordinary and committed leadership at the United Nations where he emerged as the first black African to take up the role of the world’s top diplomat, serving from 1997 to 2006 and his exceptional stewardship that led to the successful war against the HIV/AIDS pandemic including the establishment of the social investment fund “The Global Fund” to Fight AIDS, Tuberculosis and Malaria as well as the launching of the Millennium Development Goals.”

Governor Okowa expressed the hope that the international community and all those who mourn the late Kofi Annan will continue to honour his legacy of selfless service and commitment to human dignity and global peace.

He prayed God to grant his soul eternal rest and comfort his family, well-wishers and the people of the Republic of Ghana in this period of loss and global mourning.