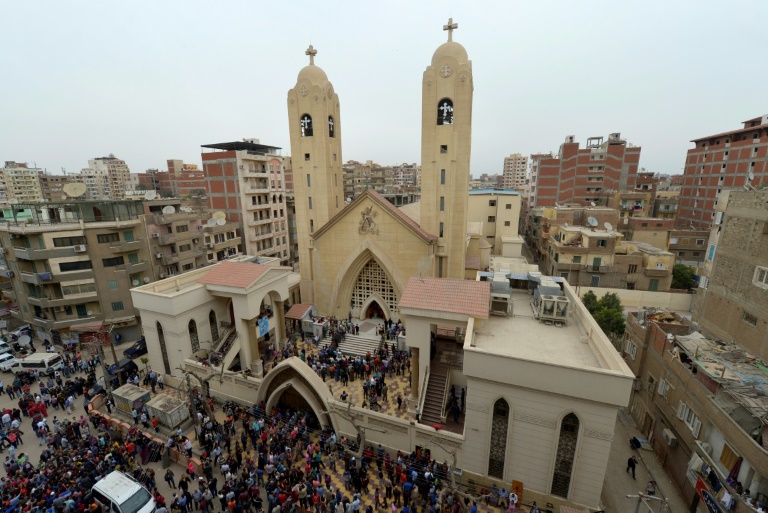 The Islamic State group has claimed responsibility for the attacks which also injured more than 100 people and occurred a week before Easter, with Pope Francis scheduled to visit Egypt later this month.

The first bombing, in Tanta, a Nile Delta city about 100 km (60 miles) north of Cairo, tore through the inside of St. George Church during its Palm Sunday service, killing at least 27 people and injuring at least 78, the Ministry of Health said.

The second, carried out a few hours later by a suicide bomber in Alexandria, hit Saint Mark’s Cathedral, the historic seat of the Coptic Pope, killing 16 people, including three police officers, and injuring 41, the ministry added.

Coptic Pope Tawadros, who had attended mass at Saint Mark’s Cathedral, was still in the building at the time of the explosion but was not harmed, the Interior Ministry said.

“These acts will not harm the unity and cohesion of the people,” Tawadros said later, according to state media.

A relative of one of the victims reacts after a church explosion killed in a Coptic Church, Egypt, April 9, 2017. (REUTERS)

Deflecting Western criticism that he has suppressed political opposition and human rights activists since he won election in 2014, Sisi has sought to present himself as an indispensable bulwark against terrorism in the Middle East, and he identifies militant Islam as an existential threat.

“The attack…will only harden the determination (of the Egyptian people) to move forward on their trajectory to realize security, stability and comprehensive development,” Sisi said in a statement.

Thousands gathered outside the Tanta church shortly after the blast, some weeping and wearing black.

They described a scene of carnage. “There was blood all over the floor and body parts scattered,” said a Christian woman who was inside the church at the time of the attack.

“There was a huge explosion in the hall. Fire and smoke filled the room and the injuries were extremely severe,” another Christian woman, Vivian Fareeg, said.

Pope Francis, who is due to visit Cairo on April 28-29, offered prayers for the victims.

“Let us pray for the victims of the attack unfortunately carried out today,” he said in an Angelus prayer.

Copts, who make up about one tenth of Egypt’s population of more than 92 million and who celebrate Easter next weekend, have been targeted by several attacks in recent months.

Jihadists and Islamists accuse Copts of supporting the military overthrow of Islamist president Mohamed Morsi in 2013, which ushered in a deadly crackdown on his supporters.

In December, a suicide bombing claimed by IS killed 29 worshippers in Cairo.

The bombing of the church within a compound that also holds the seat of the Coptic papacy was the deadliest attack against the minority in recent memory.