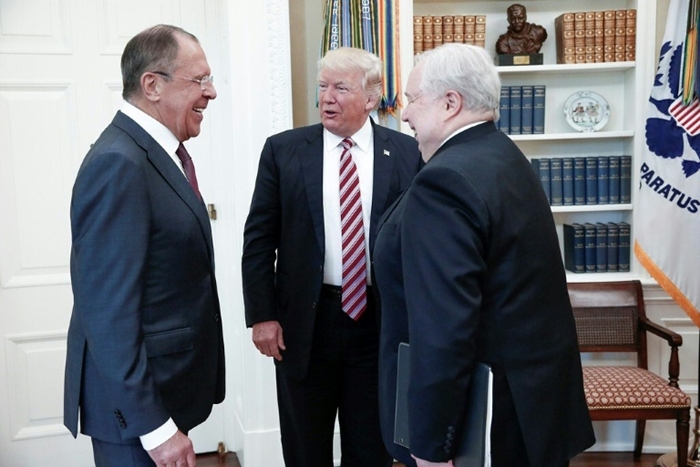 US President Donald Trump has defended his decision to disclose information to Russian officials during a White House meeting last week, saying he had an “absolute right” to share “facts pertaining to terrorism and airline flight safety.”

The president took to Twitter to counter a torrent of criticism, including from his fellow Republicans, after reports that he had revealed highly classified information about a planned Islamic State operation.

Two US officials said Trump shared the intelligence, supplied by a US ally in the fight against the militant group, with Russian Foreign Minister Sergei Lavrov and Russian Ambassador Sergei Kislyak during a meeting last Wednesday.

The disclosures late on Monday roiled the administration as it struggled to move past the backlash over Trump’s abrupt firing of FBI Director James Comey, who was investigating the president’s ties to Russia.

The turmoil overshadowed Republican legislative priorities such as healthcare and tax reform and laid bare sharp divisions between the White House and U.S. intelligence agencies, which concluded late last year that Russia had tried to influence the 2016 presidential election in Trump’s favor.

Russia has denied such meddling, and Trump bristles at any suggestion he owed his Nov. 8 victory to Moscow.

“As President I wanted to share with Russia (at an openly scheduled W.H. meeting) which I have the absolute right to do, facts pertaining to terrorism and airline flight safety,” Trump said on Twitter. “Humanitarian reasons, plus I want Russia to greatly step up their fight against ISIS & terrorism.”

Trump weighed in personally the morning after his secretary of state, Rex Tillerson, and national security adviser, H.R. McMaster, issued statements saying no sources, methods or military operations were discussed at the Russian meeting.

McMaster said the story, initially reported by the Washington Post, was false.

The US officials told Reuters that while the president has the authority to disclose even the most highly classified information at will, in this case he did so without consulting the ally that provided it, which threatens to jeopardize a long-standing intelligence-sharing agreement.

Levels of US classification – from lowest to highest

Confidential: Information that reasonably could be expected to cause damage to the national security if disclosed to unauthorised sources. Most military personnel have this level of clearance;

Secret: The same wording in the first sentence above, except it substitutes serious damage;

Codeword: Adds a second level of clearance to Top Secret, so that only those cleared with the codeword can see it. Administered by the CIA. The material discussed by Mr Trump with the Russians was under a codeword, sources told the Washington Post.

Group Backs the Establishment of Stars University, Golf Course in Idumuje-Ugboko
Policemen to be deployed to their Communities of Origin – IGP
Advertisement