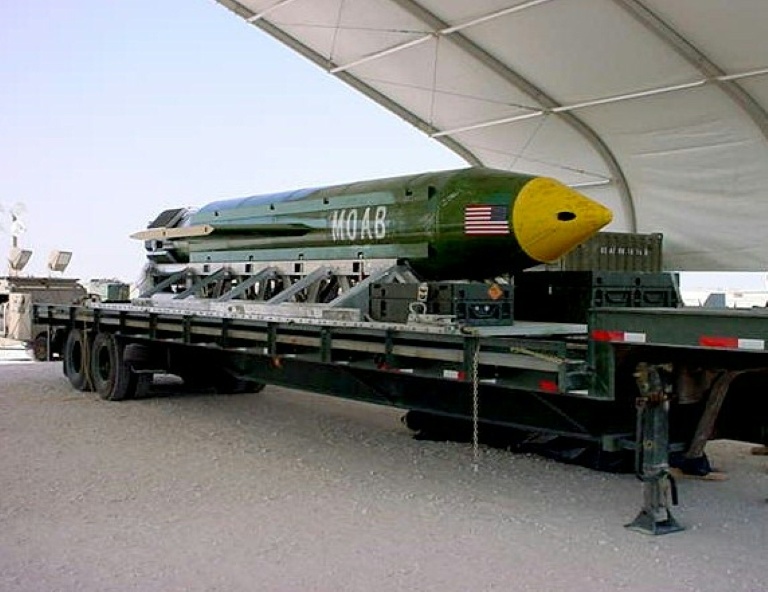 US forces in Afghanistan on Thursday struck an Islamic State militants tunnel complex in eastern Afghanistan with the ‘Mother Of All Bombs’, the largest non-nuclear weapon ever used in combat by the US military.

Afghan officials ruled out any civilian casualties despite the weapon’s destructive power.

The GBU-43/B Massive Ordnance Air Blast bomb — dubbed the “Mother Of All Bombs” and unleashed in combat for the first time– hit IS positions in eastern Nangarhar province on Thursday.

The bomb is expected to further erode IS’s capabilities in Afghanistan and sends a warning to the much bigger Taliban group ahead of their annual spring offensive.

“As a result of the bombing, key Daesh (IS) hideouts were destroyed and 36 IS fighters were killed,” the Afghan defence ministry said, adding that the bombing was carried out in coordination with local military forces.

The huge bomb, delivered via an MC-130 transport plane, has a blast yield equivalent to 11 tons of TNT. It was originally designed as much to intimidate foes as to clear broad areas.

The explosion reverberated for miles and engulfed the remote area in towering flames, destroying what Afghan officials called a network of underground IS tunnels and caves that had been mined against conventional ground attacks.

The bombardment took place amid rising global tensions as the US military steps up raids against global jihadist groups.

It comes only a week after US President Donald Trump ordered missile strikes against Syria in retaliation for a suspected chemical attack, and as China warned of the potential for conflict amid rising US tensions with North Korea.

An Afghan militant source told AFP from an undisclosed location that local residents had described the ground shaking “like an earthquake”, with people being knocked unconscious by the blast.

Another militant source told AFP that 800 to 1,000 IS fighters were believed to be hiding in the area.

The arsenal was dropped after fighting intensified over the past week and US-backed ground forces struggled to advance on the area. An American special forces soldier was killed last Saturday in Nangarhar while conducting anti-IS operations.

Security experts say IS had built their redoubts close to civilian homes, but the government said thousands of local families had already fled the area in recent months of fighting.

“Precautions were taken to avoid civilian casualties,” President Ashraf Ghani said on Twitter, throwing his support behind the bombardment.

It was “designed to support the efforts of the Afghan National Security Forces (ANSF) and US forces… conducting clearance operations in the region.”

Nangarhar, which borders Pakistan, is a hotbed of IS militancy. US forces have conducted a number of air strikes on jihadist bases in the area since August last year.

IS, notorious for its reign of terror in Syria and Iraq, has been making inroads into Afghanistan in recent years. It has attracted disaffected members of the Pakistani and Afghan Taliban as well as Uzbek Islamists.

But the group has been steadily losing territory in the face of heavy pressure both from US air strikes and a ground offensive led by Afghan forces.