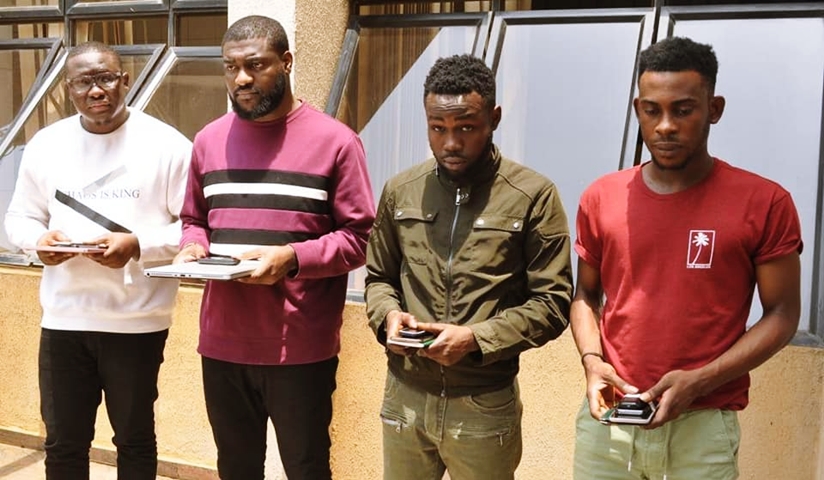 In its war against internet fraud, operatives of the Cyber Crime Section at the Abuja Zonal office of the Economic and Financial Crimes Commission, EFCC on Tuesday September 24, 2019 raided the residence of suspected yahoo-yahoo fraudsters and arrested four of them at Plot 1202 News Engineering Estate, Dawaki, Abuja.

In the course of the operation, some of the items recovered include mobile phones, laptop computers, and a Mercedes C350. They will be charged to court as soon as investigations are complete.

In another development, Justice O.E. Abang of the Federal High Court, sitting in Abuja on Tuesday September 24, 2019, adjourned hearing in the case involving former governor of Adamawa State, Murtala Nyako to October, 29 and 30 for further hearing.

Nyako, who was Adamawa State governor between January 2011 and December 2014 is facing prosecution by EFCC on 37-count charges, bothering on money laundering to the tune of N29billion before Justice Abang.

At the resumed hearing today, prosecution counsel, Oluwaleke Afolagbe, told the court that the prosecution needed an adjournment on the matter to enable it produce its witness.

He disclosed that though there had been three adjournments on the matter, all efforts by the prosecution to bring the witness to the dock have been thwarted by the continued absence of the witness.

“We still think we should put the witness in the box but the information we have is that the said witness is out of the country to the UK, and that he is sick and receiving treatment. We apologise to the court that we are not able to produce our witness. We also apologise to the senior counsel to the defendant,” the prosecution counsel said.

Afolagbe reminded the court that the case was reassigned to the present court and that the prosecution has before now, called a witness and tendered huge documents in establishing its case.

He explained that one of the witnesses was no more in the employment and is nowhere to be found, explaining that the prosecution has made several efforts that proved abortive and for this reason, was asking for adjournment.

Afolagbe stated that this was the prosecution’s final adjournment application adding that the court may close the case by the next adjournment date, if his team fails to produce the witness.

The defense counsel, Ibrahim Ishaku, opposed the application for another adjournment, reminding the court that there was a pending application with respect for the release of international passport of the defendant, which was dated September 20, 2019.

“My lord, we oppose the adjournment by the prosecution. The learned senior counsel had explained that they have two more witnesses, so if one is not present, another should be around. If the prosecution has witness, four months is enough for them to produce the witness and the liberty of the defendant is at stake. This is a criminal matter, we therefore oppose the application and urge the court to disapprove and adjourn the matter for us to open our defense,” Ishaku stated.

Justice Abang in his pronouncements, ordered the court’s chief registrar to release the international passport of the second defendant to enable him travel to Ghana to see his family, declaring that he shall return to the country on or before September 30, 2019, and that upon his return, he shall deposit his international passport with the chief registrar of the court pending the conclusion of trial.