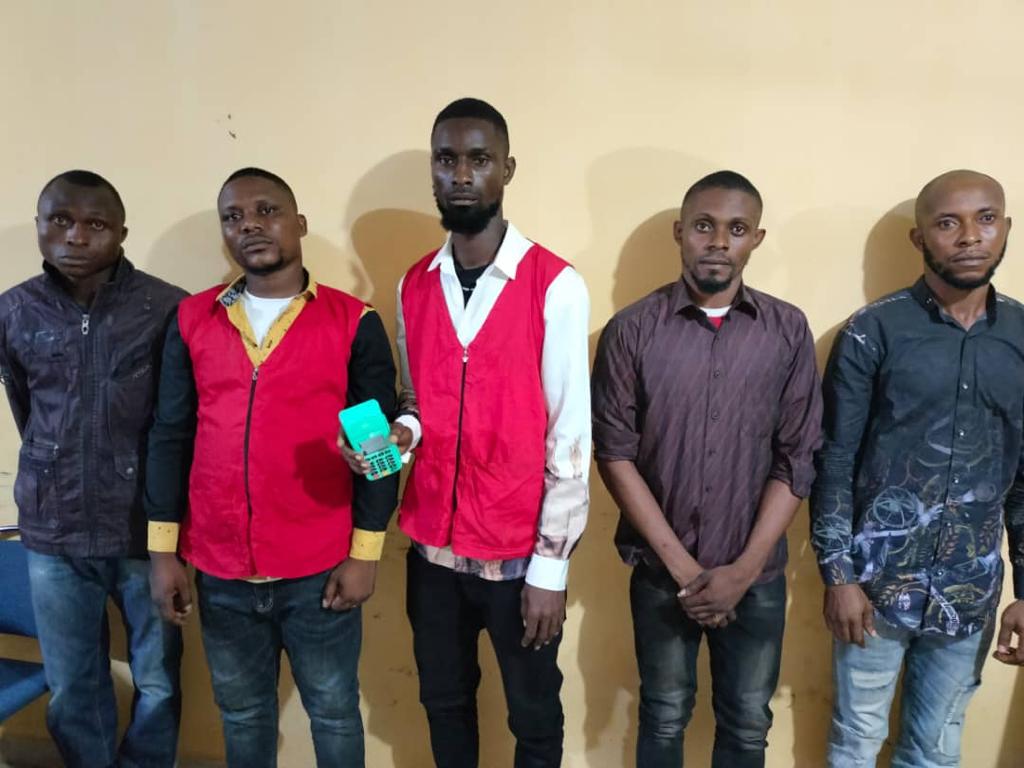 ARREST OF FAKE EFCC OPERATIVES: DELTA STATE POLICE ARREST CULPRITS RESPONSIBLE FOR BREAK-INS, KIDNAPPINGS, AND EXTORTION OF UNSUSPECTING VICTIMS IN THE GUISE OF BEING EFCC OPERATIVES

Following series of complaints received from members of the public, especially from the youths, alleging that EFCC operatives usually break into their houses at night, forcefully arrest them, take them away and extort huge sum of money from them, which partly gave rise to the “END EFCC” protest in Ughelli that led to the burning of over thirteen trucks and destruction of properties, the Command did not relent, as intelligence gathered revealed that they may not be EFCC operatives as it is being alleged.

On 16/11/2022, the Command received another complaint from a victim (name withheld) whose house was stormed at night by the syndicate, they gained entrance into the compound by scaling the fence, broke into his apartment, forcefully abducted and took him away in a white Toyota Hiace bus.

Five other victims also reported to the Command and made statements of how they were robbed of about fifteen million naira (#15,000,000). It became clear that it is the activities of hoodlums pretending to be EFCC Operatives.

Consequently, the Commissioner of Police CP Ari Muhammed Ali FCIA, PSC+, directed the Command Decoy Squad to investigate, ensure that they are arrested and brought to book. In compliance with this directive, on 23/11/2022, the Commander CP-Decoy ASP Julius Robinson, acting on credible information led operatives on a sting operation, trailed them to their hideout in a Hotel (name withheld) located in Asaba where they hibernate to plan their next operation and arrested five suspects namely; (1) Prince Allison ‘m’ age 29yrs, resident in port Harcourt and the leader of the syndicate claiming to be EFCC contract staff in Portharcourt, (2) George Chisom Onyeweagu ‘m’ 29yrs resident in Owerri and he operates the POS that they use to forcefully withdraw money from their victim’s account, (3) Duke Okoro ‘m’ age 40years resident in Asaba Delta State, (4)Joseph Osinachi ‘m’ age 23yrs, resident in Lagos State, (5) Onyocha Stanley ‘m’ age 32yrs, resident in Owerri.

The suspects have admitted to have robbed different victims from various parts of the State, they also stated that, they sometimes lodged their victims in a Hotel for days until they succeed in extorting huge sum of money from them or force them to transfer money into their mobile POS.

Their white operational Hummer bus, two locally manufactured EFCC jackets, a POS machine and eight mobile phones were recovered from them. Six of their victims have identified them as the syndicate who broke into their houses under the guise of being EFCC Operatives. Investigation is ongoing.

The CP therefore advised the public especially the youths to have a rethink before taking laws into their hands as some situations may have more to it than it meets the eyes. He assures residents in the State that justice will be served, and will ensure that the culprits are duly prosecuted.