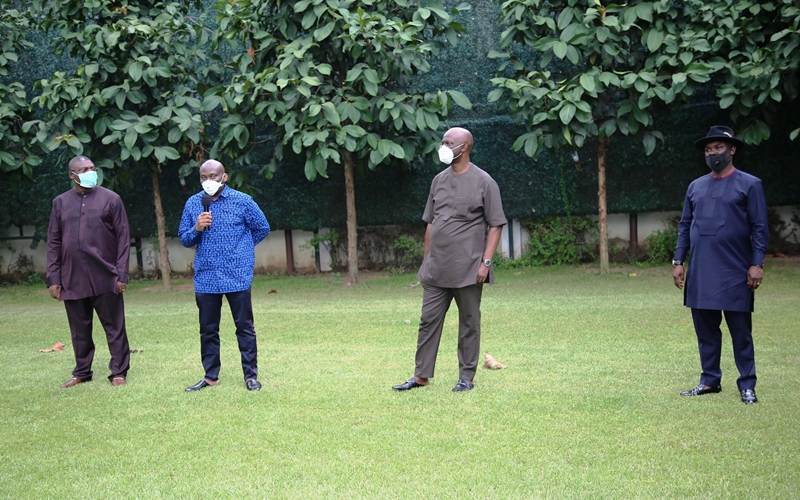 Federal lawmakers elected under the platform of the Peoples Democratic Party, PDP from Delta State in the House of Representatives have endorsed Governor Ifeanyi Okowa’s move to establish a new security outfit in the state.

The caucus said it was impressed by the governor’s decision to set up the security outfit known as “Operation Delta Hawk” in view of the prevailing insecurity in the state, ranging from herders-farmers clashes, kidnapping and other violent crimes.

Minority Leader of the House, Chief Ndudi Elumelu, who led the caucus on a solidarity meeting with the Governor at Government House, Asaba, disclosed that the caucus visited to thank the governor for his initiative on rising insecurity in the state through the proposed security outfit.

According to Elumelu, we are here to express the unalloyed support of the caucus to His Excellency’s decision to set up a security apparatus in the state, which has already been named Operation Delta Hawk.

He also said that the caucus was appreciative of the way and manner the state government had been fighting the Coronavirus pandemic and for providing palliatives to vulnerable Deltans during the lockdown period.

The minority leader, who was in company with Reps Ossai Ossai, Victor Nwokolo and Ben Igbakpa, disclosed that they also came to consult the governor on the contentious Infectious Diseases Bill before the House.

“We have come to visit our Governor to interact with him, but most importantly to congratulate him because since COVID-19 started, we have not had time to come because of the lockdown so we had to seek permission to come and thank him immensely for the manner in which he has carried out the issue of COVID-19.

“On the floor of the House, we pride ourselves as people from Delta because our governor has been able to distinguish himself creditably in the manner in which he has catered for the people of the state.

“We are proud of him because apart from being governor, he has also been very empathetic with the plight of Deltans.

“We also came to communicate with him on the things that has been happening in the House most especially Infectious Diseases Control Bill and to discuss with him on the inter-state lockdown and how it can be sustained to discourage people moving from various states to another.

“Aside implementing the lockdown, we also congratulated the governor on his decision to set up ‘Operation Delta Hawk’ which we believe will help in solving the insecurity problem that we currently face in Nigeria and not even Delta alone.

“The measures he has taken so far in addressing the insecurity as it relates to Delta is something we are very proud of and that is why we are here,” he said.

He stressed that with regards to the infectious diseases bill before the lawmakers, they were in Asaba to seek the governor’s opinion as a medical doctor and on how the Delta caucus will approach the issue.

According to Elumelu, we were elected by Deltans to represent their interests and whatever views the governor may have collated from the opinion of Deltans will form the focus of our action on the contentious bill.

On his part, Nwokolo said that setting up of Operation Delta Hawk was a proactive step in line with Community Policing initiative of the Inspector-General of Police.

“All over the world we are talking about community policing, so setting up Operation Delta Hawk is in that direction which will bring up a team of professionals in the real sense of security professionals to advise the state in what direction to go.

“He is being proactive and we must commend him because you can’t be putting infrastructure for your people yet they are killing them every day.

“He is one man who doesn’t believe in self-help and being lawless and that’s exactly what he has decided to do and we are optimistic that he will record huge success from this decision as he has always had in the past.

“He believes in the State House of Assembly and whatever he does must be backed up by law,” he added.

In his contribution, Igbakpa commended Okowa for measures at re-opening the state’s economy after the lockdown.

“Most people, especially the daily-income-earners suffered immensely during the lockdown; a lot of people are suffering but government alone cannot come to their aid no matter the level of palliative that government will bring to them.

“So, the essence is to open the economy and let certain parts of the economy function, like the construction industry. We are very much in support of the re-opening of the state economy.

“We know that the pandemic is still there but we have to learn to live with it because COVID-19 is real; we must maintain all protocols as directed by the NCDC,” he said.