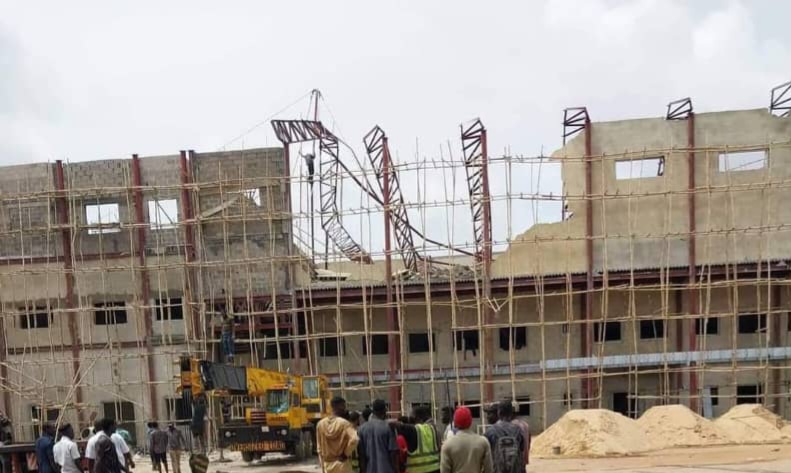 Portion of Collapseed Structure within the premises of Stephen Keshi Stadium, Asaba

Delta Government has stated that, no loss of life was recorded on the accident which occurred at the construction site of the indoor sports complex at the Stephen Keshi Stadium Asaba.

State Commissioner for Information, Mr Charles Aniagwu in a life video at the venue of the incident on Thursday, November 10, 2022 said reports making the rounds of substandard materials as cause of the accident were untrue.

He said the accident was caused by misalignment of the crane by its operator which led to the heavy duty equipment crashing on the wall in one of the floors.

According to him, contrary to reports of loss of lives only one person sustained minor injury and has since been treated while other workers have also returned to site.

He said the contractor has assured that the crashed wall would be fixed within 48 hours.

“Right behind me is the premises of the indoor sports hall under construction at the Stephen Keshi Stadium.

“One person sustained minor injury and has since been treated and they have returned to work. The workers are very much on site and we are moving with speed.

“The unconfirmed reports of loss of life is not true and any body saying the Stephen Keshi Stadium has come crashing down is also peddling the wrong information.

“As a matter of fact, the Stadium is undergoing some renovation work ahead of the National Sports Festival.

“The contractor has assured us that in less than 48 hours the part of the wall that collapsed on account of the misalignment of the crane would be fixed,” he stated.

He therefore urged the general public to discountenance any report stating loss of life on account of the minor accident at the construction site.