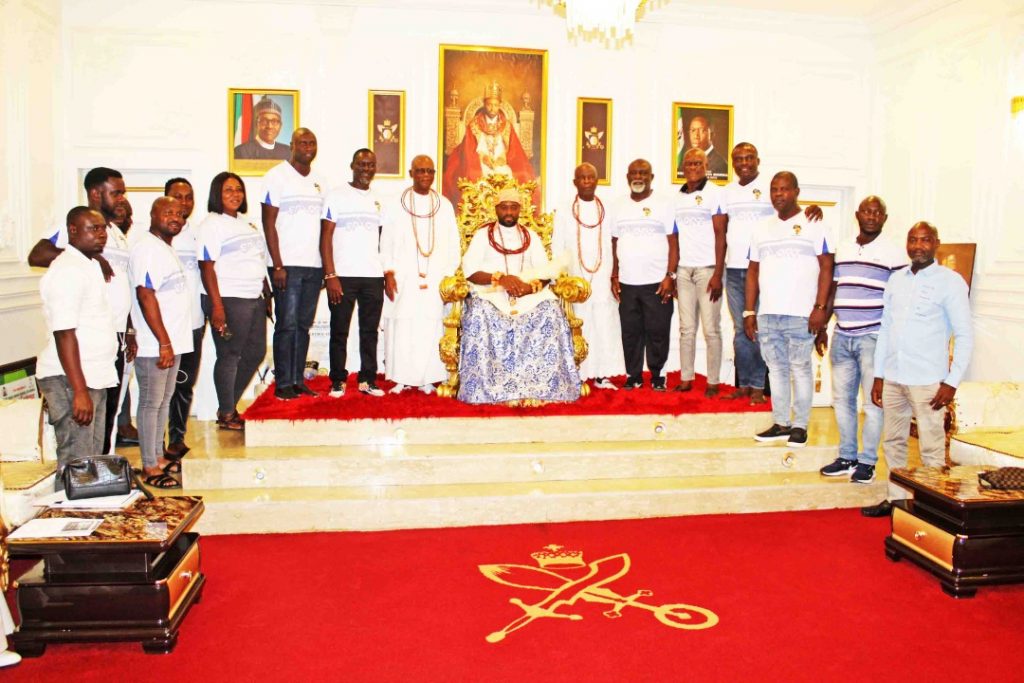 …Wishes He Could Play Football.

The Olu of Warri, Ogiame Atuwatse III, has said that he would have loved to play in the 2022 Ijaw/Itsekiri peace and unity football competition scheduled to start on November 16, 2022, to mark this year’s International Day of Tolerance noting that his chiefs would not let him, as he loved playing football when he was much younger.

The Warri Monarch stated this on Monday, November 7, 2022, while playing host to Chief Mulade Sheriff and members of the Local Organising Committee (LOC) who paid him a courtesy visit in his palace where he gave his endorsement and royal blessings to the peace and unity football event.

The Olu applauded Chief Comrade Sheriff Mulade for initiating such a laudable programme and treated the LOC members to a cheerful reception. He promised to liaise with Mr. Amaju Pinnick to bring his wealth of experience in football management to support the process. He then endorsed the football tournament with his royal blessings and prayed for a successful Ijaw/Itsekiri football competition.

Some traditional chiefs who joined the Olu to receive members of the team included Chief Mene Brown, Chief Patrick Yalaju, Chief Clement Maleghemi amongst other personalities.

Earlier, the LOC officially presented the event’s branded T-shirt to the Olu, seeking his royal blessings and presence to inspire and deepen the unity between Ijaw and Itsekiri, as well as his strong support for the grassroots sports event that has been organized to promote sustainable coexistence and talent hunting in the area since 2017.

The chief sponsor and organiser of the Ijaw/Itsekiri peace unity football tournament, Comrade Mulade congratulated the Olu for his recent national honour of CFR by President Muhammadu Buhari, saying it indicated his love for peace building. He said the tournament which started in 2017, was well embraced in the State.

According to Mulade, the previous matches have thrown up the need to restrategize so that the best Itsekiri team can meet the best Ijaw team at the finals of the event. He said the visit to the monarch was to intimate and inform him about the event and also seek his royal blessings. He used the opportunity to invite the Warri Monarch to the 3rd edition of the football tournament.

Chief Sheriff Mulade who is the Ibe-sorimawei of Gbaramatu kingdom, said the tournament would be held at Benikrukru and Ugborodo communities in Warri South West LGA. While Benikrukru is an Ijaw community, Ugborodo is an Itsekiri community, all aimed at achieving the purpose of the football fiesta. Chief Mulade said the Olu’s presence was needed at the opening and finals, especially to present the trophies.

He noted that football is one thing that helps to unite a people, adding that the football game was aimed at deepening and promoting peaceful coexistence between Ijaw and Itsekiri people in the State.

The Local Organising Committee was led by Chief Sheriff Mulade, and the Chairman of Delta State Football Association, DFA, Mr. Kenneth Nwaomucha who doubles as SSA to the Governor on Sports. Others were the LOC spokesman, Matthew Itsekure; Dr. Jeffrey Wilikie; Hon. Friday Ugedi, SSA to the Governor on Community Matters, amongst others.