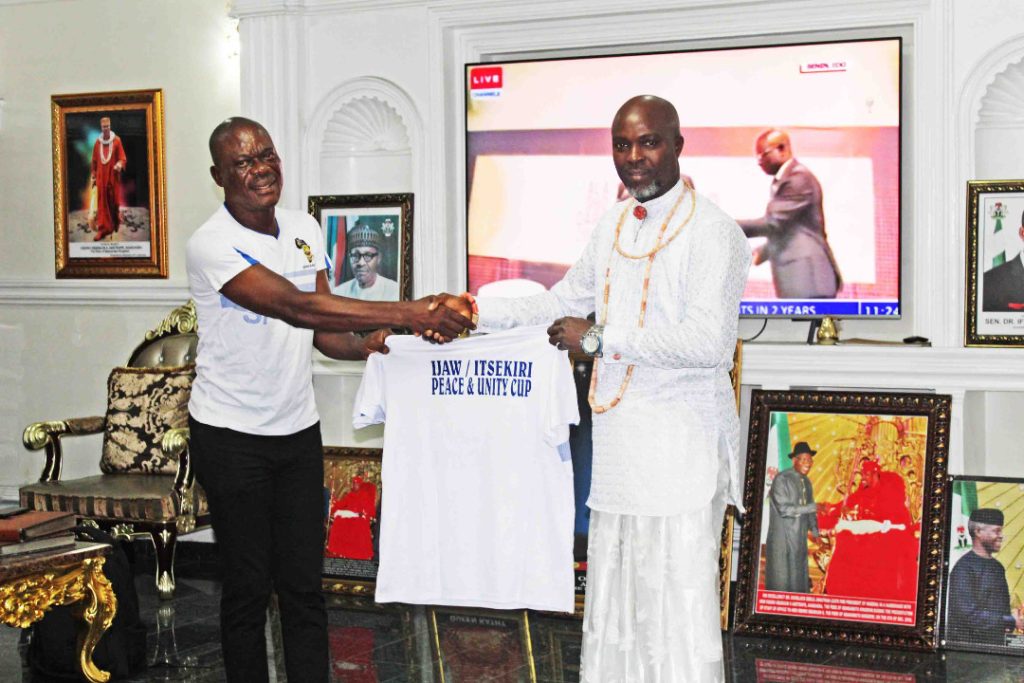 Members of the Local Organizing Committee, LOC for Ijaw/Itsekiri Peace and Unity football Cup were on the 11th of November, 2022 received by His Royal Majesty, Oboro Gbaraun II, Aketekpe, Agadagba of Gbaramatu Kingdom in his palace at Oporoza, the traditional headquarters of the kingdom.

After the Convener, Chief Comrade Sheriff Mulade had introduced the team to the Monarch, he then appreciated the Pere for his commitment to peace. He thanked the Royal Father for always sending high power delegations to represent the Palace at the event.

ALSO READ:  I Will Resolve Aladja/Ogbe-Ijoh Land Dispute If Elected As Governor - Omo-Agege

Comrade Mulade also briefed the Pere on why the competition would be held as stated in the draw/fixtures of the competition which will enable both Ijaw and Itsekiri teams to meet at the final. He intimated the Palace that the 3rd edition would spread across the three (3) Warri LGAs for all inclusiveness.

In his response, the monarch appreciated the organizer’s initiative and implored him to continue with the preaching and spreading of the need for peaceful coexistence stressing that peace is not negotiable and also enlightened the LOC team on the importance of peace to attract development to Delta particularly Warri and environs.

As part of his support, the Pere made a cash donation to the organizers of the Ijaw/Itsekiri tournament.

The spokesperson for the LOC, Mathew Itsekure thanked the King for the kind gesture and presented the branded T-shirt of the tournament to the Pere. He asked for his royal blessings and presence to inspire and deepen the unity between Ijaw and Itsekiri, as well as his strong support for the grassroots sports event that has been organized to promote sustainable coexistence and talent hunting in the area since 2017.