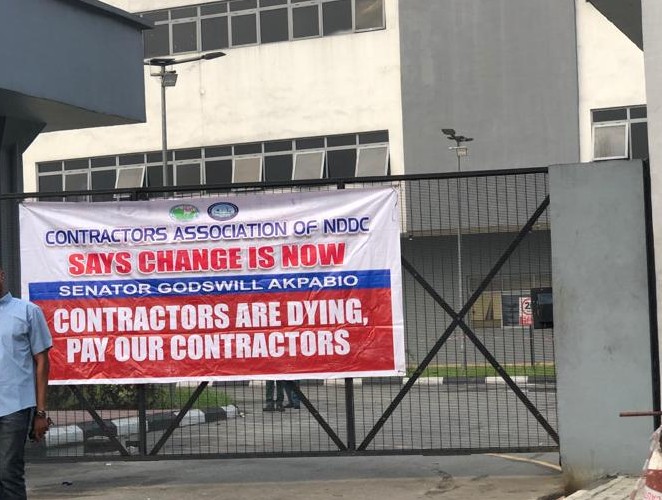 The Niger Delta Development Commission, NDDC, has pledged to settle all verified outstanding claims by its contractors in its efforts to facilitate sustainable development of the oil-rich region.

A source close to the Interim Administrator of the Commission who spoke on condition of anonymity said the NDDC boss was saddened that contractors who had done their jobs were still being owed many years after completion.

He said that the NDDC boss regretted the closure of NDDC headquarters by aggrieved contractors and called for patience “to achieve an amicable resolution.”

The source, who is a director in NDDC, said: “The Interim Administrator is not happy that contractors who had completed their jobs were yet to be paid. There is no reason to owe these contractors except the fact that enough funds have not been released to NDDC to take care of the debt.”

He disclosed that the Federal Government owed the Commission over N1.9 trillion, while the oil companies owed in excess of $4billion (about N2.2 trillion). “This huge indebtedness to NDDC is far in excess of what the Commission owes its contractors and has exposed us to this kind of situation,” the director added.

He also disclosed that the bulk of the indebtedness was inherited from past administrations of the Commission.

According to him, “The Interim Administrator has been very prudent and circumspect about adding to the Commission’s liability with new contracts. But he is determined to clear the debts because he believes that those who have worked for the Commission deserve due reward.”

The source said that President Muhammadu Buhari set up a reconciliation committee “headed by the Minister of Finance to determine how much is owed to NDDC and reconcile the accounts.”

He stated that President Buhari and the Minister of Niger Delta Affairs, Senator Godswill Akpabio, “are concerned about the situation and must be commended for all efforts being put in place to ensure that all monies owed NDDC were paid. This will be resolved soon so that contractors can receive payment in this Christmas season.”

“The Interim Administrator is working tirelessly to pay outstanding debts and calls for calm and patience from all aggrieved contractors and service providers,” he added.

Meanwhile, the Media Director to Sole Administrator of the Commission, Mr Effiong Akwa, Mr Chijioke Amu Nnadi, confirmed that the commission is putting everything in place for a better customer service to the people of the region, including the payment of contractors, who are mainly from the Niger Delta Region of the Country.

According to him, “We are certainly positioning the commission for effective delivery of service to the people of the region, including the contractors who are from the area.”