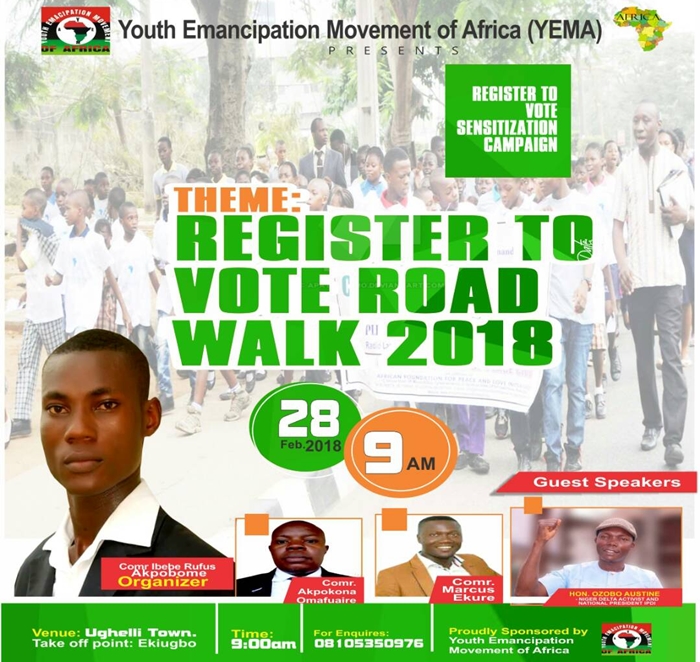 The founder of Youth Emancipation Movement of Africa (YEMA), an advocacy group with the vision of creating a better African society through advocacy, Comr. Ibebe Rufus Akpobome has disclosed his plans to organize a Road Walk in Ughelli North Local Government of Delta State to mark his birthday on the 28th of February, 2018.

According to him, the aim of the Road Walk, tagged: ‘Register To Vote Road Walk’, is to create awareness on the needs for people to register and get their voter’s card ready ahead of the forth coming General Election in 2019.

Speaking with Newsmen at his Ughelli residence, Comr. Ibebe Rufus, stated that he decided to organize the event after a study by YEMA showed that many people are yet to register in the ongoing voters registration exercise in the state.

He noted that he came to the understanding that, the low turn out of people to register would not only affect the forth coming election negatively, but also, it would affect those that would need their voter’s card for bank transactions before and after the election.

His words, “I am doing this Road Walk to create this awareness now because if people don’t register, they won’t be able to vote and that would mean we can’t have a credible election in 2019. Aside that, we have other things that the voter’s card can be used for, like opening of bank accounts. It could also be used as a means of identification. So you see, this awareness is beyond politics, it is an awareness for a better society and that is why I am using it as a birthday gift to all Nigerians”.

In his opinion, credible elections can only be attained when all stakeholders of which, the electorates are part among, participate actively in the electoral process. He noted that, without awareness like this to encourage people to register, there would be low voting in 2019, and that would deprive us all of the free and fair election we desire irrespective of our political parties or religious affiliation.

He called on all Nigerians to support him as this is this is a philanthropic gesture aimed at creating a better society through voters awareness.

He ended by saying that the rally is not a political gathering as participation is free and open to everyone irrespective of their political, religious, ethnic,  educational or economical background.