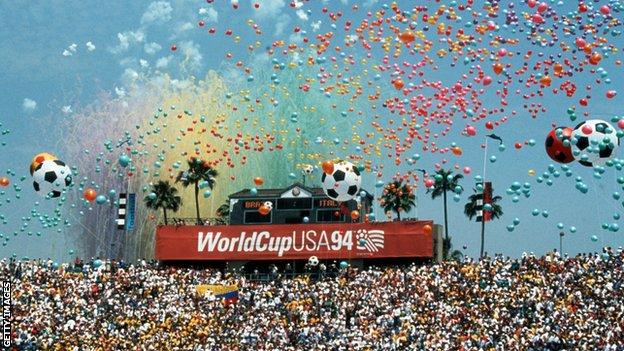 The United States, Canada and Mexico have announced they will make a joint bid to host the 2026 World Cup.

It will be the first tournament after the expansion from 32 teams to 48 and, if successful, would be the first time a World Cup has been shared by three hosts.

The proposal would be for the USA to host 60 matches, with 10 games each in Canada and Mexico.

The decision on who will host the event will be made in 2020.

That is three years later than originally scheduled because of corruption allegations surrounding the awarding of the 2018 and 2022 World Cups to Russia and Qatar.

The USA staged the 1994 World Cup, which had the highest average attendance in the tournament’s history, while Mexico was the first nation to host the event twice, in 1970 and 1986. Canada hosted the 2015 women’s World Cup.

US President Donald Trump has promised to build a border wall between the USA and Mexico but Sunil Gulati, president of the US Soccer Federation, said Trump is “supportive” of the bid and had “encouraged” it.

“When our nations come together as one – as we will for 2026 – there is no question the United States, Mexico and Canada will deliver an experience that will celebrate the game and serve players, supporters and partners alike.”

European and Asian countries cannot bid for the 2026 World Cup due to world governing body Fifa’s rotation policy, which means the previous two host confederations – Europe in 2018 and Asia in 2022 – are excluded.

The new-look tournament will begin with an initial round of 16 three-team groups, with 32 qualifiers going through to the knockout stage.

Fifa’s executive committee is no longer responsible for the final say on which country is awarded a World Cup.

Instead, it will establish a shortlist before the 209 member nations of Fifa cast a vote for their preferred choice.