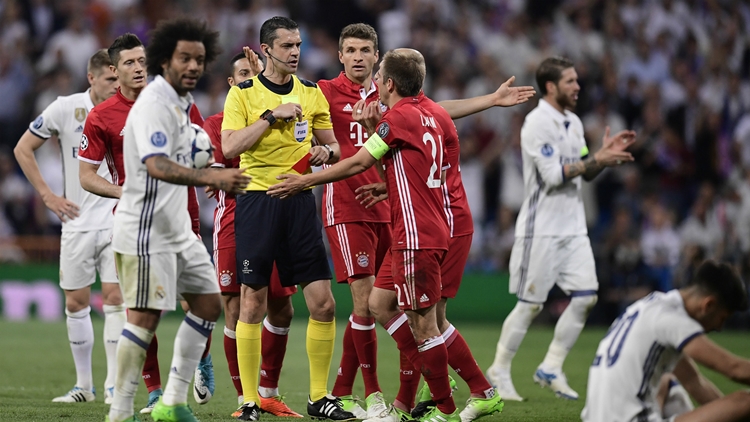 Bayern Munich manager Carlo Ancelotti took a swipe at referee Viktor Kassai saying he “wasn’t up to the task” of a Champions League quarter-final and called for video technology “as soon as possible”.

Bayern midfielder Arturo Vidal was sent off for two bookable offences, while Real Madrid’s Cristiano Ronaldo scored in extra time from an offside position as the Spanish holders won 6-3 on aggregate on Tuesday.

“We had thought of everything going into this game – except the referee,” Ancelotti said.

“You can’t decide a semi-final spot like this. It shouldn’t happen at this level.”

“The referee probably wasn’t up to the task,” Ancelotti said.

“I don’t think Real Madrid have any influence on referees. The officials tonight simply got it wrong. I had never been in favour of video technology, but I must admit it’s necessary now.”

Goal-line technology – to determine whether the ball has crossed the line – was brought into the Premier League for the start of the 2013-14 season and the Bundesliga from 2015-16.

And a trial – possibly in Britain – using video assistant referees for “game-changing decisions” will begin no later than the 2017-18 campaign, football’s law-making body the International Football Association Board (IFAB) has said.

He said: “It was an extremely emotional spectacle, you can only compliment both teams. Our team has given everything, we must not forget that.

“It was great football, but unfortunately the referee gave some extreme decisions at our expense. The referee was of course the killer.”

In his reaction, BBC 5 live pundit Pat Nevin said, “I don’t want the referee to have spoiled the entirety of this game because it was a fantastic tie over two legs – but the referee killed it with the sending off.

“It was terrible, and then he gets the decision wrong for Ronaldo’s goal.

“The referee will probably get as much chat as anyone else.”