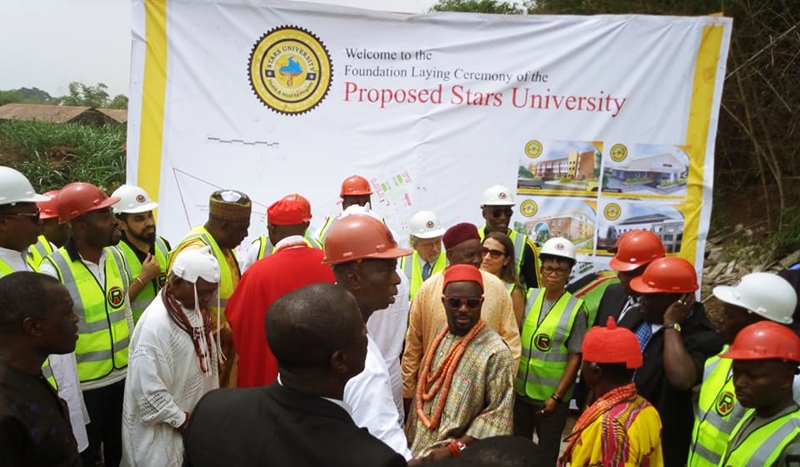 The sleeping town of Idumuje-Ugboko was awaken on Tuesday, April 2, 2018 by an unprecedented gathering of over 2000 persons who trooped to Mount Nwoko Resort to show their solidarity to the Anioma Prince and Delta North hopeful at the Red Chambers in the 2019 general elections over his goodwill in establishing a world class university in the community.

Being the the official unveiling and ground breaking ceremony of STARS University; the first Sports University in Sub-Sahara Africa, dignitaries from across Delta State, Nigeria and the world at large including, business moguls, politicians, student bodies, international athletes, horde of journalists, various women groups and traditional rulers, converged to witness the epoch event.

Adding steam to the merits of a Sports University in the country, ex international Nigeria sports stars, John Fashanu and Chioma Ajunwa, called on all Anioma sons and daughters to rally round Prince Ned Nwoko in sustaining University and root support for his Senatorial ambition in order to give him the much needed platform to do more for the region.

Fashanu lamented that talent are abound in Nigeria but people don’t often invest in Sport development, expressing delight that the institution was conceptualise by a sport lover.

Chioma Ajunwa said that Ned Nwoko have great passion for Nigerians back in the UK and have shown that as a political figure when he first represented his people in the green chambers.

“We know a lot of politicians who take their money outside Nigeria but here is a politician, Hon Prince Ned Nwoko who have decided to put his money here to benefit his people. Am so proud of you sir. Am so excited because besides employing hundreds, this sport university would give me opportunity to do what I am doing outside here in Abia state”, Chioma Ajunwa said.

The ceremony which was chaired by Captian Hosa Okunbor, had the Commissioner for Higher Education in the State, Engr. Jude Sinebe, representing the State Governor, Dr Ifeanyi Okowa who performed the ground breaking ceremony of the University.

In his speech, the Chairman of the occasion, Capt. Okunbor stated that the university project was driven by the passion the proprietor have for his people and sport development in the country.

While addressing the mammoth crowd at the event, the founder of STARS University and Senatorial aspirant for Delta North in the 2019 elections, Hon Prince Ned Nwoko said that Nigerians youths have raw talents that need to be harnessed in area of sport hence the citing of the institution, saying the sport university would also major on other conventional courses but sport would be a core course.

“I know many stars will be produced from here. And stars mean Sports Technology, Art and Research Science and we will produce many from here. The emphasis is sport technology. So you must support me in doing this. It will open up big opportunity for our young ones. And I am happy this is being cited here because here in Delta state we always come first in sports”.

“But we must take this beyond the shores of Nigeria and that’s why we are doing this. I know we have a lot of work ahead and I also know I have supporters who are ready to support me in achieving this dream”.

He said that the idea was conceptualise by his late uncle who always encourage him in his sport potentials, adding that he would do everything possible to ensure that the institution succeed.