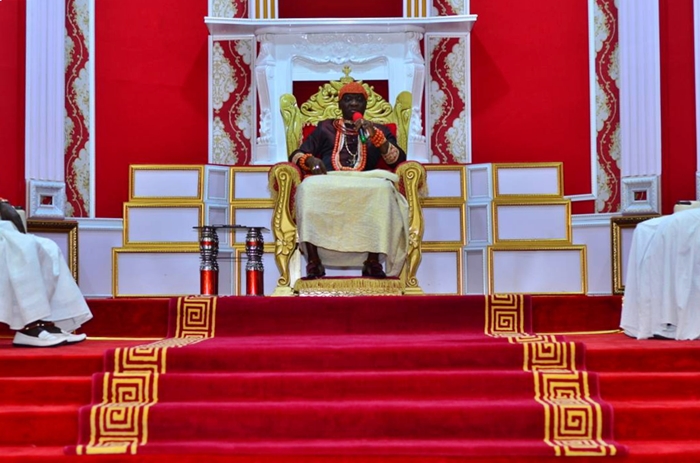 …Charges the People to Get their Pvcs.

The Olu of Warri, Ogiame Ikenwoli has commended the Eric Igban Foundation for its deep involvement in scholarship scheme and other human capital development that are geared towards stimulating growth and creating enabling society for future generations, particularly in Itsekiri nation.

Speaking in his palace in Warri when he played host to the Director-General and Chief Executive Officer of the foundation and aspirant to the Delta State House of Assembly, Warri South West Constituency, Hon Andrew Igban, Ogiame Ikenwoli stressed the need for concerted efforts towards reducing illiteracy and poverty in the land.

The Monarch stated that it was gratifying to know that over the years the foundation have been very committed to scholarships scheme, human capacity building and development programs, including adult education, youth development, vocational training and skills acquisition among others and urged it not to relent in its determination for a better society.

While praying for Hon Igban on his aspiration to represent the people of Warri Southwest in the Delta State House of Assembly, Ogiame Ikenwoli charged all his subjects of voting age to avail themselves the opportunity of the ongoing Permanent Voters Registration exercise by the Independent National Electoral Commission, INEC to register in order for them to participate in the 2019 electoral process.

The Royal Father also stressed the need for politicians to ensure that promises made to the people during campaigns were fulfilled, maintaining that Nigeria needs credible leaders to grow the nation.

Hon Igban who was accompanied to the palace by hundreds of people that cut across several interest including notable politicians, community, women, youth leaders and beneficiaries of Eric Igban Foundation said he was in the palace for royal blessings as he continues with consultations with stakeholders in Warri South West over his ambition to represent the people in the state legislature in 2019.

The former PDP Youth Leader and recipient of the United Nation World Habitat Humanitarian and Philosophic award of excellence for his love for national peace, youth empowerment, community development, humanitarian and Philanthropic services, said he is in the race to add values to the lives of the people.

Hon Igban assured the Olu that he would remain a true ambassador of Itsekiri nation and indeed the entire people of Warri South West, even as he informed the royal father that the support for his aspiration cut across Itsekiri-Ijaw ethnic divides following his track records of reaching out to all segments of the society.

Others who spoke extolled the virtues and qualities of Hon Andrew Igban, stressing that he had use his foundation to promote peace, stability and prosperity in Warri South West local government and Itsekiri nation at large.

They urged the people to support his aspiration to represent them in the Delta State House of Assembly, maintaining that Igban has the capacity to provide quality representation to Warri southwest constituency.

Some palace Chiefs and other sons and daughters of Itsekiri nation were present during the visit which featured special prayers for Hon Andrew Igban for his commitment to the growth of the society and his House of Assembly race.