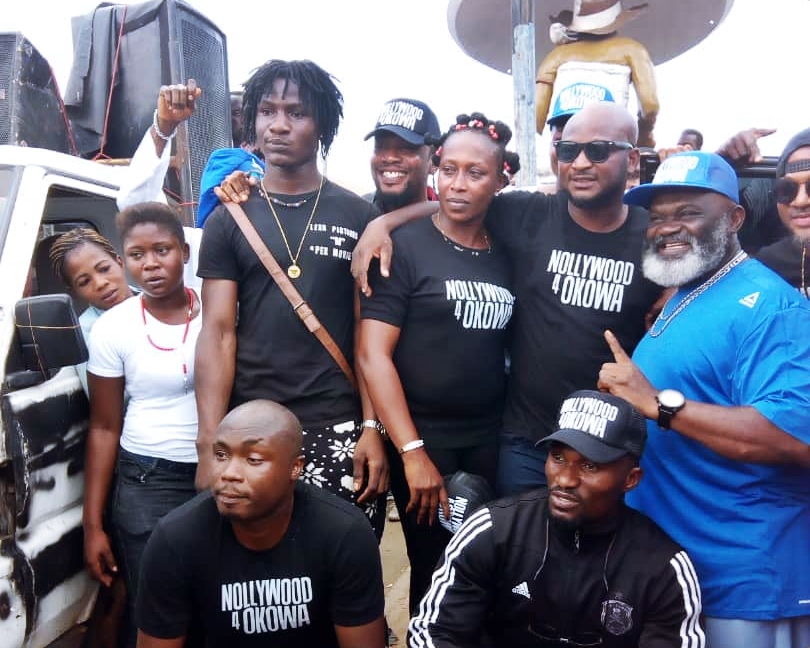 A political support group known as NOLLYWOOD4OKOWA led by Delta state born Nollywood actor Dave Ogbeni has embarked on an intensive tour round Delta State to sensitize the Grassroots on the importance of registering and collecting their Permanent Voter Cards (PVCs) ahead of 2019 general election.

Dave Ogbeni and his group made up of top Nollywood actors from Delta state and nearby states used the opportunity to reiterate their gratitude to Delta State Governor, Senator. Dr. Ifeanyi Okowa whom they describe as the man of the people whose style of leadership and philosophy lies on the disposition that all Deltans are equal in his eyes.

Speaking during the tour, Ogbeni endeared everyone in the state to go get their Voters Card and come out enmass to vote Governor Okowa for a second term in office in the forth coming general elections.

The ace actor who gave reasons why the movie practitioners in the state anonymously agreed to support Okowa, noted that the Governor’s policy has been very encouraging to investors thereby wooing top investors to the state which in turn has contributed to the State Internally Generated Revenue.

On road construction, the founder and Convener of team NOLLYWOOD4OKOWA, Dave Ogbeni said, “before the commencement of Okowa’s administration actors had always find it difficult to drive to various location around the state to shoot movies because of bad roads. Sometimes, we often cancel productions because a whole location bus containing over 30 crew members may break down on their way to location giving rooms to disappointments.”

“Money meant for production were sometimes diverted towards fixing broken down vehicles there by doubling the cost of production, but today we can drive to every nook and crannies of the state without experiencing any difficulty because of the smooth connecting roads in Asaba and environs. All thanks to the road master, Governor Okowa for the massive connecting road construction.”

Continuing, Ogbeni lauded Governor Okowa in ensuring a robust security system in the State, saying, “as actors and film makers, we ply the roads in State during early hours and at mid night shooting movies. Before the inception of Governor Okowa’s government, we were often robbed especially along the Illah axis, but since Dr. Ifeanyi Okowa assumed office as the Governor of Delta state, security has been very tight.”

“The Governor has been able to execute perfectly the primary assignment of any Government which is to secure lives and properties by partnering with all law enforcement agencies and assisting them where necessary”, he added.

On youths involvement in Okowa’s administration, Ogbeni stated that Governor Okowa has made attainable the old saying ‘Youths Are The Leaders Of Tomorrow’ by appointing many youths into his kitchen cabinet thereby giving them opportunities to learn the rudiments of politics and governance so that they will be well equipped for future assignments as far as governance is concerned.

“In the history of Delta State, Governor Okowa is the first Governor to appoint a 23 year-old boy Mr. Ossai Ovie Success into his kitchen cabinet as Personal Assistant on Media who has been doing his job very well to the admiration of all Deltans. This is laudable and shows His Excellency has the youths of Delta state at Heart”, he said.

Still in the eulogy, Dave Ogbeni noted that under Governor Okowa’s Government, Movie practitioners have been filming freely in Asaba. “No heavy tax, levy or case of area boys beating producers up and illegally seizing cameras because of unlawful levy. We prefer to vote Okowa again in 2019 because we can’t guaranty if the policy of another Government will favour Nollywood”.

While applauding his colleagues who came with their Delta State fans in their Thousands to throw their support for the rally which took place in various Local Governments including Warri, Ughelli, Sapele, Ozoro and Asaba which played host to the grand finale, reiterated his interest and that of his group to campaign for the Delta State Governor for a second term bid all over the 25 Local Government Areas in the State when campaign starts officially.