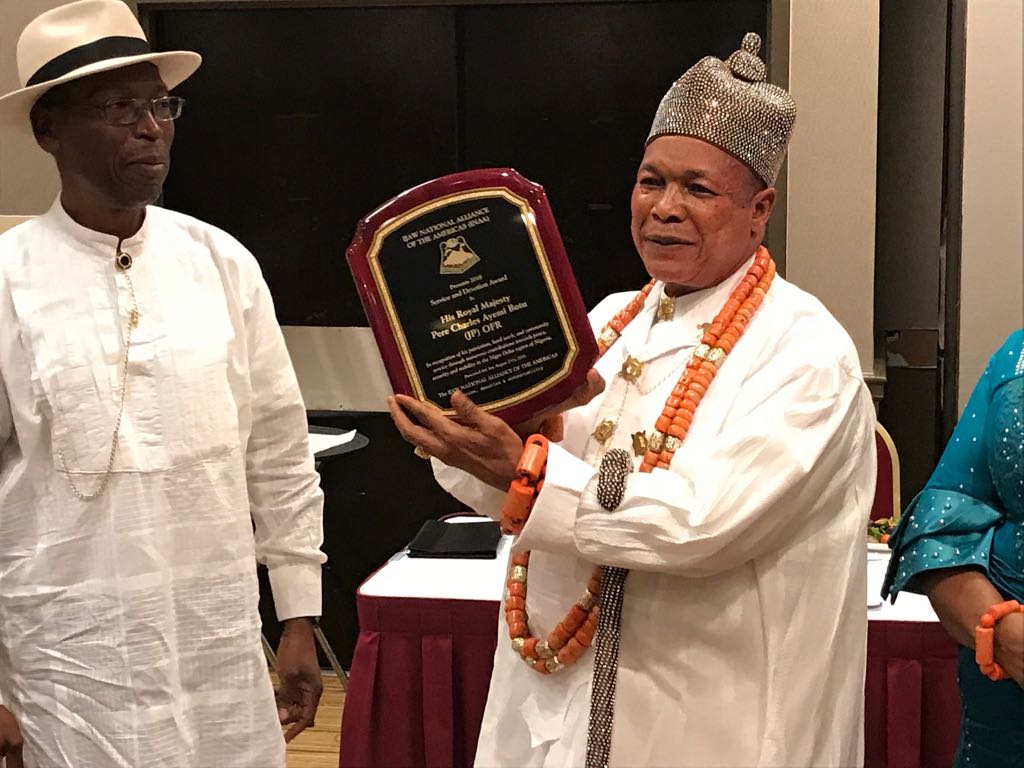 The Paramount Ruler of Seimbiri Kingdom in Burutu local government area of Delta State, King Charles Ayemi-Botu (JP) OFR, has emerged this year’s recipient of the Ijaw National Alliance of the Americas, INAA Award, in recognition of his efforts to peace and development in Ijaw nation.

The award tagged “Service and Devotion Award” according to the organizers, is to promote public spirited virtues, including selfless service and sincere devotion to the cause of unity and unwavering accountability.

The President of INAA, Mr. Julius Enarusai said “these were qualities that have right of priority in Ijaw land where there is wealth of human and material resources”, stressing that King Ayemi-Botu was never found wanting in that regard.

Mr. Enarusai stated further that, “the INAA Summit and the Service and Devotion award are fundamentally rooted in the larger context of peace, unity, integrity and self help that Major Isaac Adaka Boro represented”, and commended King Ayemi-Botu for upholding such sterling qualities that earned him the meritorious award.

Others who spoke congratulated the Seimbiri Monarch for the well deserved award, noting that his strides for the good of the people earned him the appellation “Lion of the Niger”.

The elated King Ayemi-Botu, flanked by his wife, Queen Mary Botu (JP), the Anetorofa of Seimbiri Kingdom, expressed his sincere appreciation to INAA for the award, restating his commitment to promoting peace, unity, good governance and progress in the Niger Delta region.

The former National Chairman of Association of Traditional Rulers of Oil and Gas Producing States of Nigeria, ATROMPCON, said the theme of the summit “State of Ijaw Nation” was apt as there was the need for renewed efforts and interest in the development and growth of Ijaw nation which is the fourth largest tribe in Nigeria.

King Ayemi-Botu who described Isaac Adaka Boro as a man of inestimable qualities, said the sacrifices, ideals, goals and aspirations of the late patriot will continue to propel many like him, to do more in the struggle for true emancipation of the people of the Niger Delta region.

He commended the INAA for its significant efforts and support to the growth and development of Ijaw land and the Niger Delta region, disclosing that the free medical outreach program it carried out on the 15th May 2013 in his community Okpokunu, provided many rural dwellers the opportunity for medical care.

The traditional ruler stressed the need for sustained connection between ijaws at home and in diaspora.

Former President Goodluck Jonathan at the ceremony received a Life Time Achievement Award from the INAA.