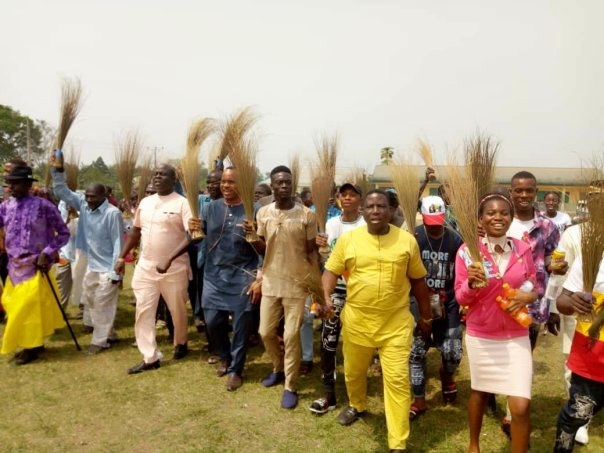 Edjophe town, Ughelli South Local Government Area was ago penultimate Saturday as thousands of ardent followers of Mrakpor Movement for Okowa 2019 besieged the town for a mother of all rallies to drum up support for the re-election of Dr. Ifeanyi Okowa.

Edjophe is the home town of the Delta state Attorney-General and Commissioner for Justice, Mr. Peter Mrakpor, a staunch supporter for the second re-election bid of the incumbent Governor.

Peter Mrakpor, the Patron of the Mrakpor Foundation, Mrakpor Support Group and Mrakpor Movement for Okowa 2019 while addressing over three thousand members of party faithfuls and ardent followers of his political movements from Ughelli South, Ughelli North and Udu, expressed delight on their massive turn out and support for the People’s Democratic Party,  PDP.

He called on the Urhobo nation to rally round the ruling party in the state as according to him, it would be the turn of the Urhobos to produce the Governor come 2023.

Mrakpor who hailed Governor Okowa for his developmental master stroke especially in road construction across every nook and cranny of the state, assured him of the total support of his people.

The Justice Commissioner who received over 230 decampees from other political parties in the State, mainly the All Progressive Congress, APC, assured the new members of inclusiveness even as he called on them to be loyal party members.

Speaker after speaker at the rally, including the Ughelli South PDP Chairman, Mr. Michael Oshetigho, Chief Emmanuel Akpoguma, Amb. Mrs. Mercy Avwana, David Edonor and Hon. Wilson Oghenemu amongst others, paid glowing tributes to Mr Mrakpor for his humility, simplicity and for empowering his people.

They charged other political appointees to emulate him as he was always available to attend to their needs.

Mrakpor who was presented with an award of quality leadership by the movements assured him of their unflinching support for the Governor whom they nickname “the road master “.

Meanwhile, the decampees from the APC at the rally including the Ewu Ward 3 APC chairman Mr Philip Ogede who dumped his former party, set their brooms, symbol of their former political party ablazed.

Mr. Philip Ogede  expressed regrets for joining the APC, adding that they are happy returning back to the PDP fold.

They said they left their former political party because the party has become characterized by various factions, in fighting and lack of internal democracy.