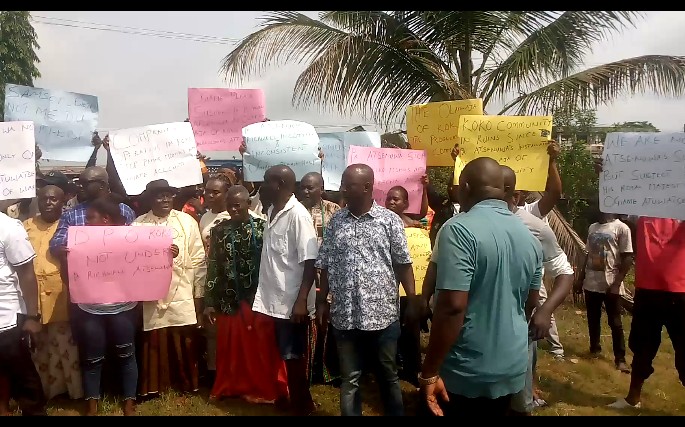 Residents of Koko, headquarter of Warri Local Government Area, Delta State, have protest against the call by the Olare-Aja, Pa Richwell Atsenuwa for the removal of the Divisional Police Officer, SP Othuke Omenuwona.

The residents numbering hundreds took to the streets on Friday, condemning the Olare-Aja for leading a protest against the Divisional Police Officer.

Pa Atsenuwa had last Wednesday led some persons to protest at the Koko Police Division, against the DPO, calling for his removal, and citing inducement over some community issues he was said to have acted on.

The protesters carrying placards with inscription such as; ‘Koko DPO is doing what is right’ ‘Olare-Aja should stop intimidating the police’ ‘we have known peace since this DPO came’, insisted that it was not the place of the Olare-Aja to call for the police officer’s removal.

Insisting that the DPO was only carrying out his legitimate duty, the protesters called on the state government to call the Olare-Aja to order. They alleged that since his emergence as Olare-Aja, Koko community has known no peace.

Speaking on behalf of the protesters, Elder E. O Daibo said the DPO should be left alone and allowed to remain in Koko, insisting that since his transfer to the Koko Police Division, the community has continued to experience peace.

Olori Ebi Olomu said; “those who want the DPO out know what they are afraid of, he has been upright in his duty so we want the relevant authorities to disregard the call for his removal”.

The Secretary of Koko Community Management Authority, Mr David Olayinka Atie, who also spoke to newsmen, said; “some persons whom the police has been looking for, on Wednesday gathered under the watch of the Olara-Aja to orchestrate what they call protest against a policeman that has brought a new definition to policing.

“Its shocking that the Olara-Aja is thinking that before the DPO should do his work, he must be informed first. The DPO takes order from the Commissioner of Police in extension, the Inspector General, so that idea is laughable”.

Mr Collins Aburime who also spoke, said; “we have been enjoying peace in the community until August 1st 2020, when this Pa Richwell Atsenuwa was installed as the Olare-Aja of the community.

“Since he came into power, is either one issue or the other”.

Reacting to the development, the Secretary of Warri Local Government council, Mr Samuel Meyiwa Khalil, described the protest against the DPO as shocking.

He said; “last year, the state government took a position on the crisis rocking the koko community in conjunction with the Olare-Aja (the oldest man in the community) agreed that those suspended should be reinstated to complete their one year, five months tenure, so I don’t know why some persons who are hellbent on causing crisis in Koko are doing this, the police has no problem in this issue, the case has been settled in line with the what the government thinks will bring a lasting solution to the issue”.