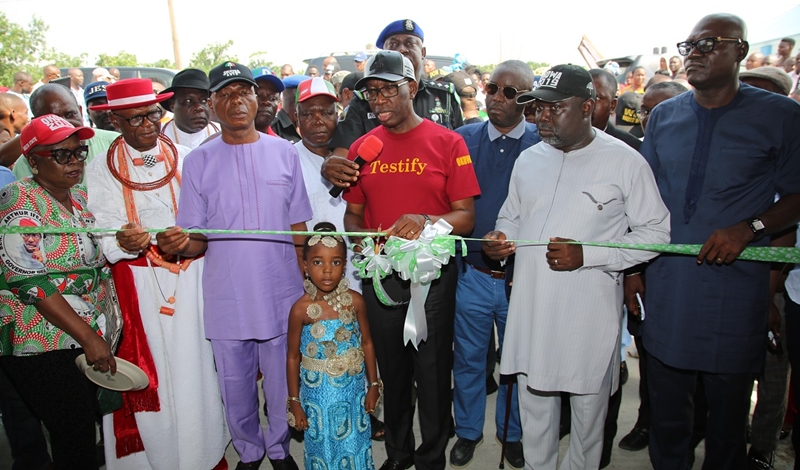 Governor Ifeanyi Okowa of Delta State has said his administration will turn around most of the riverine communities to modern towns in the next four years.

The governor gave the assurance on Tuesday, March 5, 2019 while commissioning series of projects at Oboghoro and Utonlila communities in Warri North local government area of Delta State.

“It is important as a country that we begin to think of how to impact on the lives of our people in the riverine areas; if you seek peace, and partnership with the people, you need to do things that will make them happy,” the governor said, adding, “I can see that the people are excited but, I am more excited to be in this community than you are; because, from your statements, this is the first time that a Governor is visiting this area to commission projects.”

He continued, “living in the creeks should not deprive the people of basic necessities of life and in the next four years, we shall develop more towns in the creeks; I thank the Delta State Oil Producing Area Developmental Commission (DESOPADEC) for embarking on these projects, this is how it ought to be, executing projects in line with the demands of the people.”

Oboghoro and Utonlila communities in a joint address read by Chief Solomon Arenyenka, stated, “we like to place on record that this is the first time Oboghoro and Utonlila communities have been privileged to receive a State Governor, whether elected or appointed or any other visitor of that calibre since their founding some centuries ago; Your Excellency, your visit to our communities today is remarkable as it is the first time that different projects of such magnitude are to be commissioned in any Itsekiri riverine community; how else can we appreciate you than to say that we are 100 per cent behind you,, not only in your bid to return to Government House for second tenure, but also in future.”

Chairman of DESOPADEC, Hon. Godwin Ebosa had said the projects were based on the demands of the people and thanked Governor Okowa’s administration for encouraging DESOPADEC to meet with its responsibilities to the oil producing communities.
Governor Okowa also, commissioned concrete jetties at Ogheye Dimigun Community and Koko, all in Warri North local government area.