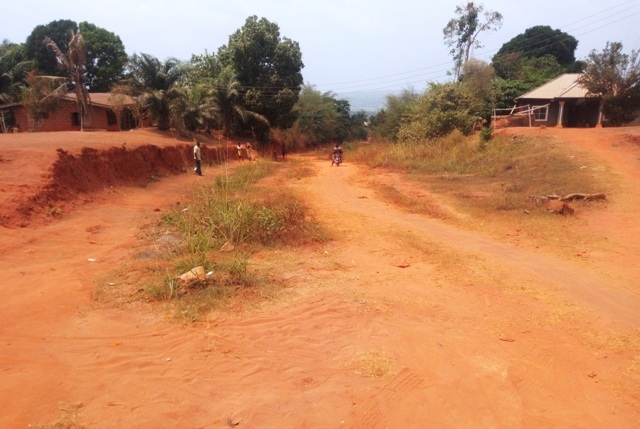 The Minority Leader of the House of Representatives, Rt. Hon. Ndudi Elumelu has said that the needs of the people will continue to be the focal point of his representation at the National Assembly.

Elumelu spoke on Thursday, February 17, 2022 at the official handing over ceremony of an Ecological Project, Ugbodu-Ohordua Road Flood and Erosion Control project, to the Contractor, held at Ugbodu in Aniocha North Local Government area of Delta State.

Elumelu who represents Aniocha/Oshimili Federal Constituency in the House of Representatives said that his people and their need will continue to be dear to him more than any other thing and revealed that the Ugbodu-Ohordua Road Flood and Erosion Control project which he facilitated, was among over nine Ecological Projects within the Federal Constituency that he proposed and submitted for the consideration and approval by the President through the office of the Secretary to the Federal Government (SGF).

“Today being Thursday, naturally I should be on the floor of the House being the leader of opposition in the House of Representatives, but I choose to be with my people (constituents) who sent me to Abuja, because without you people, I won’t be there. I am not the most dedicated, neither am I the most intelligent, neither am I the most endowed, but God used you people to choose me. So, in everything I do as your representative, I think of you,” Elumelu stated.

The Minority leader explained that for limited funds, only one project out of the nine he proposed, was considered and approved by the Federal Government and said that the challenge became the one to be picked among the over nine ecological projects.

“I had submitted, like every other principal officer over nine projects and when they took the memo to Mr. President, he told the SGF that they have limited fund for the ecological projects, so they should go and do random picking and of course my Sister, the Permanent Secretary, Dr. Habiba Lawal turned out to be the one that was divinely asked to do that and Ugbodu entered her hand. Otherwise, you can see from the projects I enumerated, we have over nine ecological projects in my Federal Constituency proposed, but Ugbodu was the one her hand torched. So it is a thing of joy for you in Ugbodu.

“So, it now means that as lucky as you are, to have been so divinely chosen for this laudable project, You must do everything possible to support the Ecological Project Office and the contractors as regards to this project, even if, it means some of us opening our houses for them to keep some of their equipment at no cost,” Elumelu said.

The Federal Lawmaker further revealed that their desire as representatives of the people was to open up various communities for economic viability and said that when the Ugbodu-Ohordua road comes on stream, Ugbodu, Ohordua, Onitcha-Uku, Issele-Uku and its environs will be better for it, for the fact it will bring about improvement in the economic activities within the various communities.

Elumelu appreciated the Secretary to the Government of the Federation, Mr. Boss Mustapha, and the Permanent Secretary in the Ecological Project Office, Dr. Habiba Lawal for their relentless effort in ensuring that the project was approved, even as he assured them of an undiluted support to see that the project is completed on time and in line with specification.

She said the bridge building was essentially to bring the contractors and the consultants to meet with members of the host communities with a view to resolving any issue that may now or in future hinder the progress of work.

“Each contract/project has an expected completion period and we in EPO would not want any delay occasioned by controversies or disputes between contractors/consultants and host communities.

“Distinguished ladies and gentlemen, the essence of this gathering in a nutshell is to emphasize the need for peaceful and conducive atmosphere devoid of rancour and acrimony to enable contractors deliver timely, good and quality projects for the benefit of your community.

“I am aware that often some host communities make demands from contractors; some even tend to dictate the way the projects should be executed. This tends to throw up disputes that linger for long thereby slowing down the pace of work. Genuine and legitimate demands on contractors must be channeled through community heads, particularly traditional rulers who if need be, will in turn forward such complaints to EPO rather than resorting to violence that would stop the progress of work,” the Permanent Secretary said.

Dr. Lawal also drew attention to the fact that Government embarked on addressing critical ecological challenges across the country to forestall environmental degradation, loss of lives and properties’, pointing out that it is imperative that peace and tranquility are needed to achieve timely completion of the projects.

“This interventionist project in this community is yours. You must do everything possible to protect and sustain it so that the resources which the federal Government has committed for the project would be gainfully utilised and will not at the end be in vain.

“You are expected therefore to co-operate with the contractor and consultant and avoid harassing them. I need to state categorically that the process of selecting projects for execution in communities is thorough with stringent criteria.

“In addition to these stringent criteria, EPO henceforth will not execute projects in any community that is notorious for harassing contractors. Only those communities that are peaceful, accommodating and supportive of contractors will be considered for more projects,” Dr. Lawal said.

She then pleaded with local government leaders, royal fathers, community heads, youth and religious leaders to prevail on their people to support and co-operate with government to serve them better.

“You should shun violence, extortion and conspiracy against contractors and by extension, the Federal Government. Most importantly, avoid actions capable of delaying the smooth execution of the project in your domain,” Dr. Lawal counseled.

Dr. Lawal commended the Minority Leader, Rt. Hon. Ndudi Elumelu for his proactive representation of his people and said that his love for his people is profound.

Highlight of the event was the signing of the document stating agreement for peace between the representatives of the community, the consultant and the contractor.