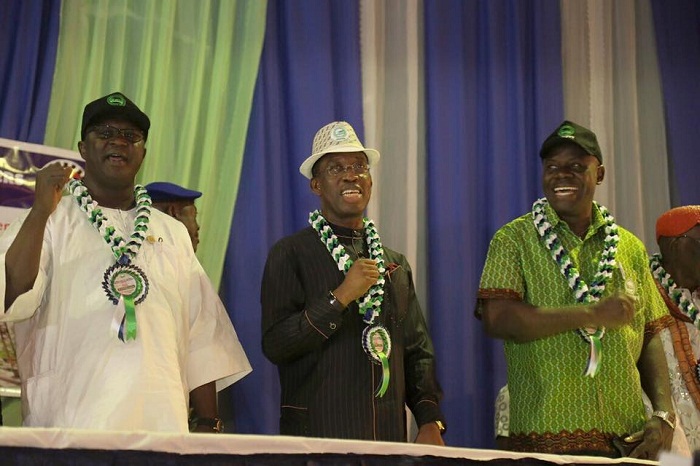 The President of the National Union of Civil Engineering Construction, Furniture & Wood Workers (NUCECFWW) Comrade Amechi Asugwuni has decried the economic condition of Nigeria and called on Federal and State Government to improve the welfare of its workers.

Speaking at the 5th National Quadrennial Delegates Conference in Asaba, Comrade Amechi said that Nigerians are hungry and it very evident in the land which is a reflection of the economic woes befalling the present leadership.

The conference which has the theme, ECONOMIC WOES; WHAT STRATEGIES FOR NIGERIANS AND TRADE UNIONS, had delegates from within and outside the country with President of the Nigeria Labour Congress (NLC) Comrade Ayuba Wabba  and Minister of Labour as special guests.

Comrade Amechi who enjoyed warm and rousing cheers from the delegates, noted that only genuine diversification of resources by the federal government, can reduce the economic challenges in the country.

On the issue of poor budgeting, he said, “federal budgets should not always maintain the traditional way. Budgets should be accounted for and see through proper execution.”

The Union president called on states to intensify in their revenue drive and avoid over reliance on federal allocations. “State governments should look into generating internal revenue because the federal allocations can no longer sustain state spending.”

Highlighting his achievements as the president of the union, he disclosed that over four thousand (4000) casual workers of the union have been transformed to authentic staff in their various work places. “If the working class is not protected, the unemployed have no hope.”

He thanked Governor Ifeanyi Okowa for creating an enabling environment to host yet another event in Delta state in a time frame of Six months.

Delivering the Keynote address, the Delta state governor, Dr. Ifeanyi Okowa noted that the power and energy sectors should be revamped so that the government can consolidate the economic down turn of the country.

In his speech, Dr. Okowa said that Government should spend wisely in the time of recession. Times like this require men and leadership with vision, that to escape the economic woes in the country, diversification should be put into high priority because the oil we rely on is just 15% of the country’s GDP.

He welcomed the delegates to Delta State and urged the Union to upgrade the workmanship of its members and uphold professionalism in jobs given to them.