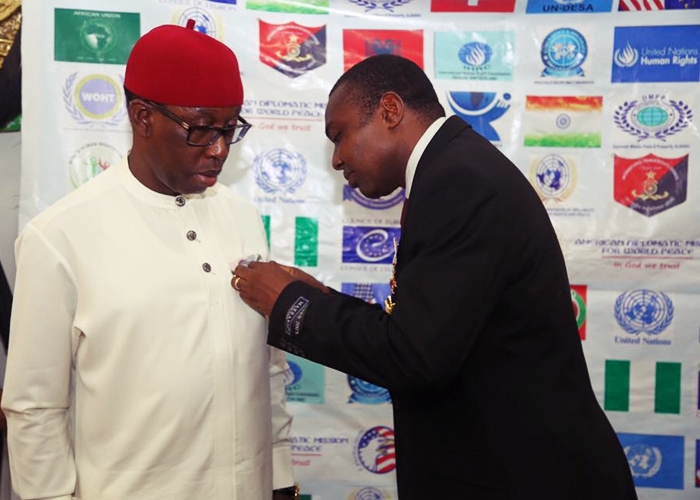 What distinguished the Madiba was his selfless style of leadership which emphasized the economic as well as political emancipation of his people. He sought to engender an egalitarian society where everyone could realize their dreams.

To Nelson Mandela, there was no such thing as part-freedom. He once famously said that “we do not want freedom without bread”. This means that economic self sufficiency is a basic component of human freedom, an irreducible minimum as nobody can claim to be free while hungry.

This political and socioeconomic philosophy of Mandela has been the guiding principle of Senator Dr. Ifeanyi Okowa, the Governor of Delta state.

Governor Okowa sharing the believe with Mandela that independence could not be complete without bread quickly identified agriculture as a veritable pathway to economic independence and development.

In this way, he launched the Skill Training and Entrepreneurship Programme (STEP) as well as the Youth Agricultural Entrepreneurs Programme (YAGEP) through which thousands of youths have become self sufficient and employers of labour. At the launch of the 2nd batch of the schemes in September 2016, the Governor stated as follows, “The way out is for people to acquire skills, empowered to be self sufficient and become employers of labour. We are training you to become job creators that we need in Delta State. You are here to improve on your lives and be in a position to be employers of labour. I believe that you are going to step into a greater future. I want to see you as better Deltans, Deltans who will say, I have been able to create jobs for my self and jobs for others.”

At another occasion, Okowa had this to say, “We are interested in the agricultural sector and anything that will enhance that sector is something that we are open to, because, we believe that, that is the way out in terms of job creation and for our people to be able to fend for themselves.”

This approach to governance is very rare in Nigeria where the political class believe that it is more politically expedient to give the people fish, rather than teaching them how to catch fish. Governor Okowa has placed the economic emancipation of Deltans in the center of his politics and policies and Deltans are better for it.

It therefore did not come as a surprise when Dr Okowa was inducted into the prestigious Order of the Pride of Africa and bestowed with the Mandela Medal on Human Rights as well as the 2016 Mandela Medal for a Long Walk to Freedom Award.

At the investiture, the International Commission of Diplomatic Relations through its Human Rights and Peace Ambassador,  Mr. Joseph Rankin who was impressed with the policies of Governor Okowa stated that “The Mandela Medal is the pinnacle of human rights recognition in Africa. We are in Asaba, the capital of Delta State, in Nigeria to honour and commend a great achiever who has made an outstanding contributions to the promotion and protection of the human rights embodied in the Universal Declaration of Human Rights and in other United Nation’s Human Rights instruments.”

He stated further that Okowa’s selection followed a meticulous process carried out by a special committee comprising the General Assembly members of the Geneva based International Human Rights Committee and the Economic and Social Council of the International Commission of Diplomatic Relations, Human Rights and Peace, noting that the creation of job opportunities through skill acquisition programme of the state government that will make the beneficiaries millionaires within a decade was laudable.

To Deltans, this award no doubt is an honour well deserved and another bright star in the glittering crown of Dr Okowa.