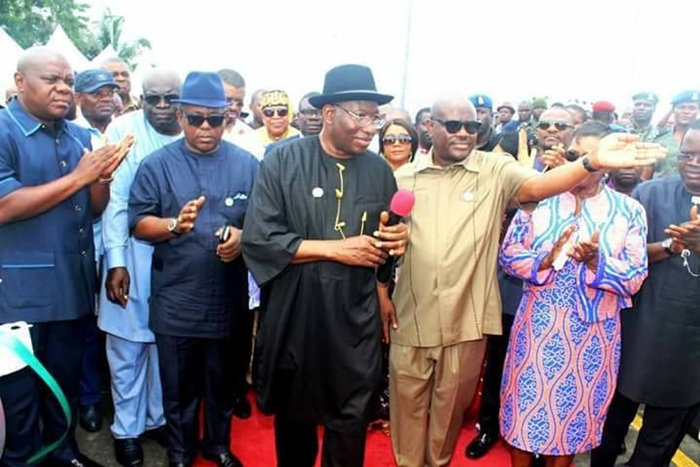 Former President Goodluck Jonathan has declared that the excellent performance of Rivers State Governor, Nyesom Ezenwo Wike has justified the support he received from all political stakeholders for his election in 2015.

Speaking during the Commissioning of the Second Nkpogu Bridge as part of the second year anniversary of the Wike administration, Former President Goodluck Jonathan said: “Governor Wike has performed wonderfully well “.

“Wike has shown so much commitment to infrastructural development. The whole of Rivers State is now a construction yard.”

The Former President pointed out that the appreciation for the excellent performance of Governor Wike goes beyond party lines. He recalled that Acting President Yemi Osinbajo after visiting the state also stated that the governor is delivering on projects.

While appreciating the people of Rivers State for the support they gave him throughout his eight year involvement in national politics, he expressed happiness for the invitation to commission the important Second Nkpogu Bridge.

In his address, Rivers State Governor, Nyesom Ezenwo Wike said that Nigerians after the two years of APC have seen the difference between good governance and false promises.

He explained that the decision was taken for Former President Goodluck Jonathan to commission the second Nkpogu Bridge as a clear message to the nation that he will never be abandoned.

“We cannot come out in the public and begin to castigate our own. Those of them who do that, should have a rethink. For us, it doesn’t matter the blackmail against Jonathan, we will continue to back him”.

Speaking further, Governor Wike said: “Those who think that they have promises from those who think they own Nigeria should be careful. They will use you and dump you at the appropriate time “.

Chairman of Monier Construction Company, Senator John Mbata said the company constructed the two bridges which have linked Nkpogu to the business districts of the state capital.

Commissioner of Works, Mr Bathuel Harrison said that the Second Nkpogu Bridge will resolve the traffic challenge in the area.

Governor Wike after assuming office constructed the first and second Nkpogu Bridges to link different parts of the state capital.