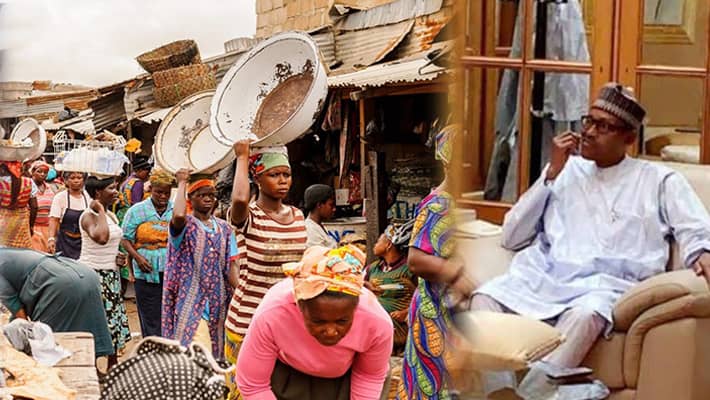 Pictorial Design Illustrating APC's Abandonment of its Promises to Nigeria

The dictionary defines propaganda as “information, especially of a biased or misleading nature, used to promote a political cause or point of view.”

As Mao Zedong pointed out, politics is war without bloodshed, as such, propaganda is often heavily deployed as weapon.

In the Nigerian political environment, the APC had distinguished itself as the Master of Propaganda by its recklessly irresponsible deception and destruction of the people with its poisonous cocktails of lies, half aa and pretensions.

Sadly, liers are liers and shameless in their perversion. That is why, in this political season, Bola Ahmed Tinubu and Ovie Omo-Agege came again to town the other day seeking to deceive Deltans and harvest political capital with another lie: that the state has fully collected and spent N240 billion accruing from undeducted 13% Derivation for several years from 1999.

Their calculation is to cause the disaffection of Deltans against Governor Ifeanyi Okowa, the ruling PDP and its candidates in the 2023 elections, but they woefully forgot that such financial matters are simply verifiable and not to be lied about.

The records and the facts are there: It was discovered that from 1999, the Federal Government did not deduct the 13% Derivation accruing to the oil producing states from the Excess Crude account which it generally redistributed to all states; the whole undeducted sum amounted to about N450 billion; when it was proven in court, the FG conceded to pay but, for fiscal convenience, it was agreed that it should pay in equal quarterly installments over five years or sixty months.

In consideration of the galloping rate of inflation by which, in five years when the money is expected to be fully paid, its value would have depreciated seriously, many of the beneficiary states, including our noisy Rivers brother, considered to draw down the credit accruing to them by obtaining bank loans in lieu of the unpaid accruals to enable them fund projects while the repayment would be made through the quarterly installments as and when the the FG continues to remit the outstanding over the five years, as agreed.

Governor Okowa did a bit differently. While what accrues to Delta State is N240 billion, he initially opted to draw down N150 billion as loan. He however later pruned it down to N100 billion in consideration for incoming administrations to also receive from the quarterly installments after his tenure.

Indeed, it must be said that quite apart from state officials who were in the negotiation with the Federal Government for the recovery of the unpaid derivations, Governor Okowa was the first to publicly make known the existence of such money. He explained, sometimes in April 2020, when he applied to the State House of Assembly for the approval of the loan, that it was a bridging loan to be repaid from the outstanding derivation and not from statutory allocations.

It is also recalled that, at that time, the APC and Omo-Agege, particularly, misinformed the public that such money does not exist. This led to wide criticism of Okowa in the false perception that he was over-exposing the state, and also of the Speaker of the House, that he approved the loan blindly as a “rubber stamp.”

We know now that Okowa told us the truth and that Sheriff Oborevwori did due diligence in approving, notwithstanding the maturity, calm and resilience with which he bore the ignorance or deliberate misinformation of the opposition.

However, even the N100 billion loan was not meant to be drawn down at once nor fully. It was scheduled to be accessed quarterly or periodically and, so far, the state government has only drawn N30 billion of it, just about two weeks ago, in this November.

On the other hand, the FG has also not paid fully. It has five years or 60 months to do so. It has only paid three quarterly installments of N4.9 billion each, amounting to about N14.7 billion, so far.

These are the true and verifiable facts, also attested to in a recent statement by Akwa Ibom State Professionals as it also affects their own state. They stated clearly as follows:

There is no need to worry about Wike’s mischief in raising false alarm which, in his pontific pretension, was intended to create disaffection against his brother South-South Governors who have refused to join his recent political shams.

Everyone knows what is biting him is the loss of the Presidential and Vice Presidential ticket and, like the proverbial leper, he has decided in uncontrollable rage, to poison the air to weaken the PDP and give advantage to its opponents, to avenge his disappointment.

Curiously characteristic, we saw the same conduct in his predecessor who also wanted to be Vice President under the PDP in 2015, when it was thought that President Jonathan would not contest in keeping with his promise of a single tenure after completing Yar’Adua’s posthumous two years.

We saw how Amaechi deployed same dramatics to constrain the PDP, how he riddled Jonathan and his wife with public insults, how he relegated the Government House, PH, to clownish theatrics to open his romance with the opposition, how he divided and subjected the Governors Forum to ridicule to position himself and how he misguided his own State House of Assembly, to the extent that a member was clubered to coma with the maze, before he finally betrayed his calculated intention to defect to the APC where had hoped to be gifted the Presidency, after Buhari, for his efforts.

In the process, he sold off his home Niger Delta, attempted to dismantle the Maritime University in Gbaramatu Kingdom in preference for setting up University of Transportation in Buhari’s Dauda, just for fine face, how he preferred to complete a rail line to Niger Republic while Maiduguri to Port Harcourt needed greater attention.

Along with the other Niger Delta APC goons at the Federal cabinet and National Assembly, including Agege, he looked away from the disrepair of the East-West Road and from the bastardisation of the NDDC which was supposed to serve their people, aggregating the essence of the commission on the new lexicon: “Off Your Mic.”

Wike’s new dancestep is, therefore, also nothing strange. He has not even achieved the brazenness of Amaechi while on same journey. It is also not the first time we are seeing a coalition of PDP Governors hacking the party. In 2015, some bluffed away. They ran back after what they saw.

Alas, the gods may not be to blame but we have seen that there is no valour in killing one’s father to marry one’s mother. We can only remind our brother about a caution in Ola Rotimi’s Kurunmi: “When the tortoise is going on a senseless journey, and you say to him, Brother Tortoise, Brother Tortoise, when will you be wise and come back home…”

It was perhaps for this that the tortoise was later able to discern that he could only see the footprints of other animals when they went in to see the sick lion, but he didn’t see their footprints coming out of the lion’s den. going in, none coming out. Brotherly caution for those who seek romance with the lion of Bourdillon.

That Tinubu and Agege amplified the lie about payment of the outstanding 13% Derivation is only consonant with life in APC. What pains worries though is to see persons of their calibre, seeking to govern Nigeria at federal and state levels, not knowing the truth of such fiscal issue of national scale or brazenly and irresponsibly standing truth on its head.

But, as with every of their lies and deceptions, the truth about APC and its emptiness not only glaringly stares us in the face but have continued to hurt and haunt Nigerians in the past seven years, plus.

We can all do the count for which, Lai Mohammed, its Spokesperson and Minister of Information has been aptly renamed “Lie.”

First, they promised change, when they got into power, they abdicated the responsibility of their promise and ran another propaganda that the “Change begins with us,” not with them that promised it.

At their Ojota charade in 2012, they said the price of fuel would be brought down from N87 to N40, they moved it to N145, now about N250. They said there was nothing like fuel subsidy, they ended up spending over N4b annually on it, as against about N1.4b under President Goodluck Jonathan, lying to us that we now consume 63 million litres of fuel everyday.

They said they will generate three million jobs annually, they threw over 63 million more people out of job in seven years, creating approximately 8.5 million unemployment annually.

They said any serious government should be able to fix power in six months, it is seven years now, the generation and transmission has dropped lower than they met it.

They said they will combat security but re-distributed Boko Haram as bandits across the nation, kidnapping, raping, maiming and traumatising citizens while somebody just picks his teeth at Aso Rock.

There is no point talking about the depreciation of the Naira nor the price of food and all essentials, what is more frightening is that they have so over-borrowed Nigeria that debt servicing consumes over 98% of national revenue and, even most scary, is that many of the loans, especially those from China, are collaterised with our sovereign assets.

That is the party and character of governance that Tinubu and Agege want to bring upon Deltans with lies and propaganda.

Delta APC Rally and Political End Of The Road
Ovie Omo-Agege: In Case You Have Forgotten!
Advertisement