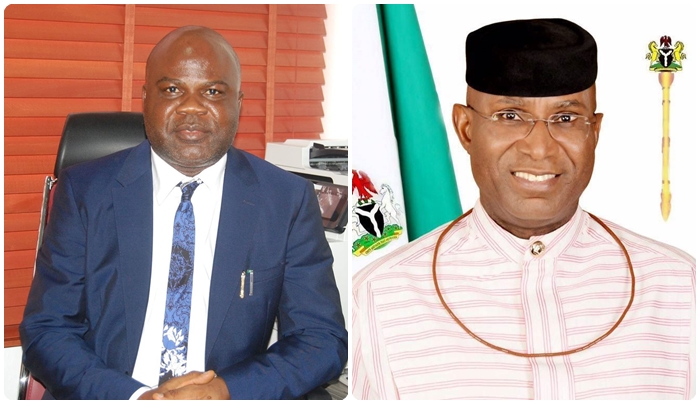 It is a true saying that a lie which is told on a sustained basis would soon assume the status of a truth. For the above reason, unscrupulous individuals have exploited the mass media especially new media to disseminate outright falsehood and misconceptions all in a bid to deceive the gullible and score a cheap political point as well as for pecuniary gains.

This sad scenario has been playing out recently where some individuals being sponsored and propelled by certain political interests have sought to reap cheap political capital from the ongoing construction and dualization of the Agbor -Abraka- Eku – Sapele road.

In one of the sponsored reports on Facebook, one Aruviere Martin Egharhevwa purporting to be a Legislative Aide to Senator Ovie Omo-Agege claimed that the said road project was “influenced“ by Senator Omo-Agege, the Senator representing Delta Central Senatorial District as part of what he said is the Urhobo agenda. Mr. Egharhevwa however failed woefully to give cogent and verifiable details of how his principal brought his alleged influence to bear on the road project. Instead of laying down hard facts, all what Mr. Egharhevwa could state as the influence of Senator Omo-Agege as far as the road project is concerned was that his principal held a meeting with the President.

We do not wish to join issues with the likes of Mr. Egharhevwa who obviously seeks to earn his pay, but that notwithstanding, when stating matters of fact especially one of a public character, consideration should be hard to the truth. Facts are sacrosanct and should not be distorted to satisfy the dictates of any paymaster.

This piece is meant to set the record straight and state the obvious fact.

The Agbor-Eku-Abraka-Sapele road which is a major federal road traversing and connecting over a dozen local government areas as well as over 350 towns and communities in Delta and Edo states had over the last 10 years fallen into serious disrepair and total abandon. Potholes graduated into deep gullies and the road became a real death trap.

Despite the importance of the road being the major corridor connecting much of the Niger-Delta with the rest of the country, neither the previous Federal Government nor the previous respective state governments considered the road for what it was worth.

This was the situation until Hon. Evance Ochuko Ivwurie the lawmaker representing Ethiope East State Constituency in the Delta State House of Assembly in an unusual but exemplary show of legislative activism in conjunction with global change.org placed the Government of President Mohammadu Buhari from February of 2016 under global duress and coercion to dualize and reconstruct the said road.

Following series of telephone, email and meetings with the Federal Government functionaries over the subject, a formal memorandum was sent to the Honourable Minister for Works and Mr. President in September 2016 as requested.

In the said memo, Hon. Ivwurie not only requested for the urgent repair of the road, but the total reconstruction and dualization of the road in line with the already existing budgetary plan dating back to 2010. Hon. Ivwurie followed up the memo which was widely published by engaging, interfacing and mounting pressure on the Hon. Minister and stakeholders at several fora on the need to urgently address the issue.

Everything said above about the efforts of Chief Ivwurie is on record and the generality of Deltans following the antecedents of the Honourable can attest to the fact. Indeed the people of Delta and Edo states especially the commuters on the road, farmers, students and the inhabitants of the over 350 towns and communities along the stretch of this road are all full of praises and have been thanking God for the Hon. Evance Ivruwie.

The alleged role played by Senator Omo-Agege is at best nebulous and inconsequential. Mr Egharhevwa is hereby challenged to produce verifiable proofs of the influence of the Senator on the project. Failing to do so, Mr. Egharhevwa and his sponsors should tender an unreserved apology to the generality of Deltans whom he thinks are gullible.

While Hon. Ivwurie and the globalchange.com were exerting their energies and doing the yeoman’s job, self acclaimed leaders of the Urhobo nation including political office holders who belonged to the ruling party including Mr. Egharhevwa’s principal, hid their heads in the sand like the ostrich. Now that the result is beginning to manifest, everyone wants to be associated with the project. Mr Egharhevwa and his likes should desist from making spurious claims about certain diaspora and professional politicians “influencing” the said road project as it makes the persons they seek to promote appear like desperate food-is-ready political harlots.

As far as the Agbor-Abraka-Eku-Sapele road project is concerned, the people know who should be commended and it is certainly not Senator Omo-Agege. Like the Bible enjoins, “give honour to whom it is due, tribute to whom it is also due.” Mr Egharhevwa should learn this home truth and give some respect to the truth. Indeed conscience is an open wound, only truth can heal it.

We hereby present our facts as witnessed by Deltans and Nigerians.

1. Petition to Fashola and President Buhari:https://www.facebook.com/HonourableEvanceIvwurie/posts/296831734043284

3. Debating the motion on the floor of the Delta State House of Assembly:https://www.facebook.com/HonourableEvanceIvwurie/posts/305615706498220

BEYOND THE RHETORIC: IBORI IS THE LEADERS LEADER
President Buhari, ECOWAS Intimidated Jammeh Out of Office