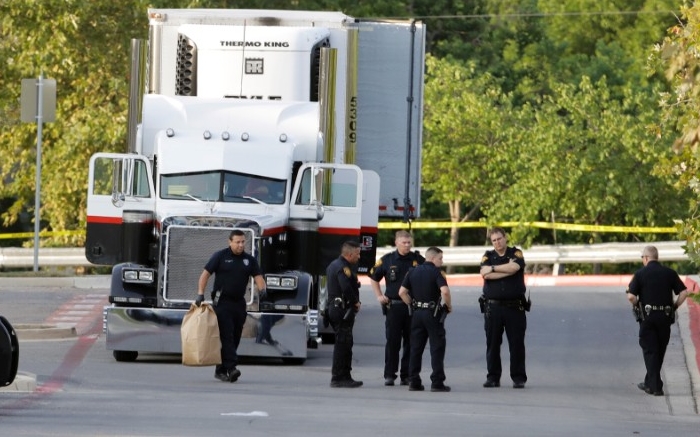 Eight suspected migrants were found dead early Sunday inside an overheated truck in a Walmart parking lot in Texas, and nearly 30 others were hospitalized, in what police said appeared to be a “horrific” human trafficking crime.

Twenty of those taken to area hospitals after the discovery in San Antonio — about a two hour drive from the Mexican border — were in serious to “extremely critical” condition, suffering from heat stroke and dehydration, authorities said.

At least 38 people were in the trailer including now fewer than two school-age children, Fire Chief Charles Hood said, but McManus later told CNN that the dead were all adult men.

It was not immediately clear how many might have escaped and were unaccounted for.

“We got a call from a Walmart employee about a welfare check in a tractor-trailer that was parked on the lot here,” McManus told a news conference.

“He was approached by someone from that truck, who was asking for water.”

The employee returned with the water and then called the police who “found eight people dead in the back of that trailer,” the police chief said, calling it a “horrific tragedy.”

Authorities used helicopters to rush some of the injured to seven area hospitals, Hood said, saying some were in “extremely critical condition or very serious condition.”

He added that the people in the truck were “hot to the touch,” adding the air conditioner in the trailer was not working. Weather in the area has been hot and dry.

The US Department of Homeland Security and immigration officials are assisting local law enforcement with the investigation.

“This is not an isolated incident… this happens all the time,” McManus said.

“It happens late at night, under darkness because they don’t want to be discovered.”

The police chief said store security footage showed that some vehicles came to pick up some travelers who were on the truck and who had made it out alive.

It was not immediately clear how long the truck had been in the parking lot, and police were working to determine who owns it.

Tens of thousands of illegal migrants from Mexico and Central America attempt to make the treacherous trip into the United States each year.

In 2003, 19 would-be migrants died in an overheated truck while being taken from south Texas near the Mexican border to Houston.

President Donald Trump has pledged to build a security wall along America’s border with its neighbor — and make Mexico pay for it — in order to crack down on illegal immigration, leading to raised tensions with Mexico City.

So far, the project has been stalled by reluctance in Congress to dedicate funding for the barrier, which could cost as much as $20 billion according to some estimates.

US Homeland Security Secretary John Kelly has been to Mexico twice to discuss immigration, human trafficking and the spiraling cross-border drugs trade.

“By any standard, the horrific crime uncovered last night ranks as a stark reminder of why human smuggling networks must be pursued, caught and punished,” acting Immigration and Customs Enforcement director Thomas Homan said in a statement.

“These networks have repeatedly shown a reckless disregard for those they smuggle, as last night’s case demonstrates.”