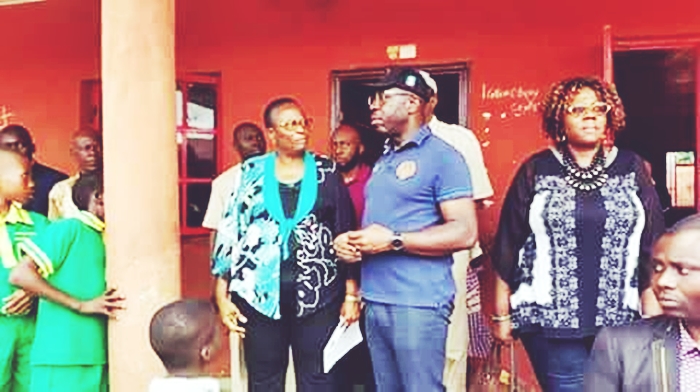 Governor Godwin Obaseki of Edo State has reiterated his determination to reposition Basic Education in the state and assured of his administration’s determination to bring glory back to education, adding that the era of malpractice during examinations was over.

Obaseki  made this known in Benin City on Saturday, July 22, 2017 while monitoring this year’s First School Leaving Certificate Examination as part of measures to ascertain the level of sanity and orderliness during public examinations.

Obaseki who was accompanied by some government officials made an unannounced stop at Ologbosere Primary School, Ugbekun area of Ikpoba Okha Local Government and expressed his displeasure over some unwholesome activities noticed in the school in which an official and a private school teacher who accompanied his pupils to sit for the primary six examination seemed culpable.

According to him: “We are bothered about the corruption and malpractices in examination process, as you can see, a lot of parents had to be kept out particularly those from the private schools who may have paid for their children to do well. They wanted access into the schools to be able to influence the process of the exams and they were stopped. I am happy that our officials have done well in ensuring that the standards we require and want to set are met.

“For the private school teachers who were caught trying to influence the examination, they would face the law as we are going to investigate them and l am sure that the Ministry of Education has its own rules on how to deal with such matters.”

The governor who was also at Ivbiyeneva, Ivbiotor, Ebenezer and George Idah primary schools all in Benin City said the manner in which the pupils comported themselves was in compliance with the state government’s policy to improve education system.

He said: “We decided that we will have the examination for primary six pupils which is a standard exam properly monitored. As a policy, we have decided that this exam should be reorganized and made a lot better and professional.”

He assured of his administration’s readiness to improve the quality of basic education in the state, stressing that the process will be tedious and rigorous but the children in the long run would be better for it.

He, however, warned parents against examination malpractices while assuring of government’s policy to improve the quality of basic education, which would see them through life.

In her remarks, the Permanent Secretary, Ministry of Education, Dr. Mrs. Osayuware Idahosa, said the challenge of shortage of examination materials was mitigated, noting also that the turnout was very impressive.

She used the opportunity to commend the governor and his entourage for participating actively in the monitoring exercise.

The Chairman of the State Universal Basic Education Board (SUBEB), Mallam Alli Suleiman, also expressed appreciation to the governor who with his collaboration had helped the board to strengthen basic education.