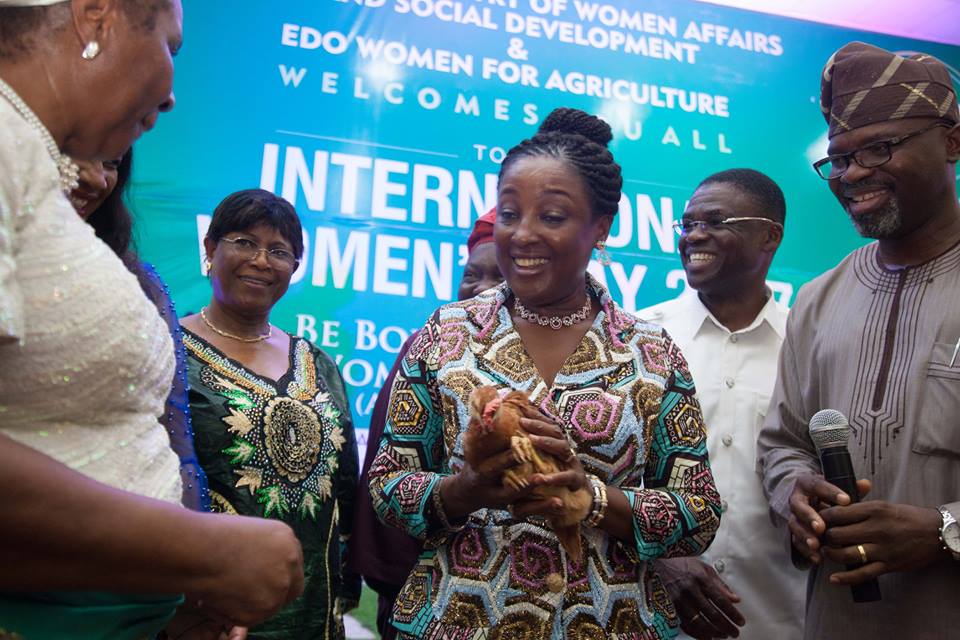 Wife of Edo State Governor, Mrs. Betsy Obaseki has distributed birds to 500 widows to become poultry farmers. She said this was part of the government’s campaign promises.

The widows, who were given feeds that would enable them feed the birds for three months, were trained in how to rear birds.

Mrs. Obaseki distributed the birds when she launched the Edo Women for Agriculture programme as part of activities to mark the International Women Day.

She said the empowerment was to give widows monthly stipends and boost the production of rural women, to tackle food shortages and poverty.

The first lady said the programme was for everybody, irrespective of political leanings.

She said: “We will create a revolution in rural poultry production that will increase productivity and income for rural women and empower them to transform access of poor households to source animal protein. Distribution of Poultry Birds to the Widows

“I brought the best company in poultry business to ensure food security. The demand for chicken and eggs is very high. We will create market for the widows to sell the birds.

“After we succeed with this, we will extend it to thousands of women. I will churn out initiatives for women to have opportunities to be rich.

“We are not doing politics, we are doing governance. Edo indigenes are allowed to join this administration. We will not behave like people with small minds. This is no time for politics.”

The First Lady also revealed that the programme is in collaboration with the Bank of Industry and Bank of Investment Trust Company.

She said, “I do not believe in giving people fish but in teaching them how to fish. We are collaborating with professionals to train 500 widows on poultry production and to teach them how to make money from the poultry business. Collection of Poultry Feeds for the Distributed Birds

Continuing, she noted that the poultry production programme, which is part of her agriculture initiative for women in the state is a pilot programme and first of its kind in the country.

‘’This programme is a pilot scheme that will be test run in Benin and would be implemented forthwith across the state’’, she said.

On the implementation of the programme, she said that the trainees would be given 40 birds; comprising 20 broilers and 20 layers and feeds to start the poultry production.

Some of the beneficiaries said they could become millionaires.

They said they were trained in how to market birds.