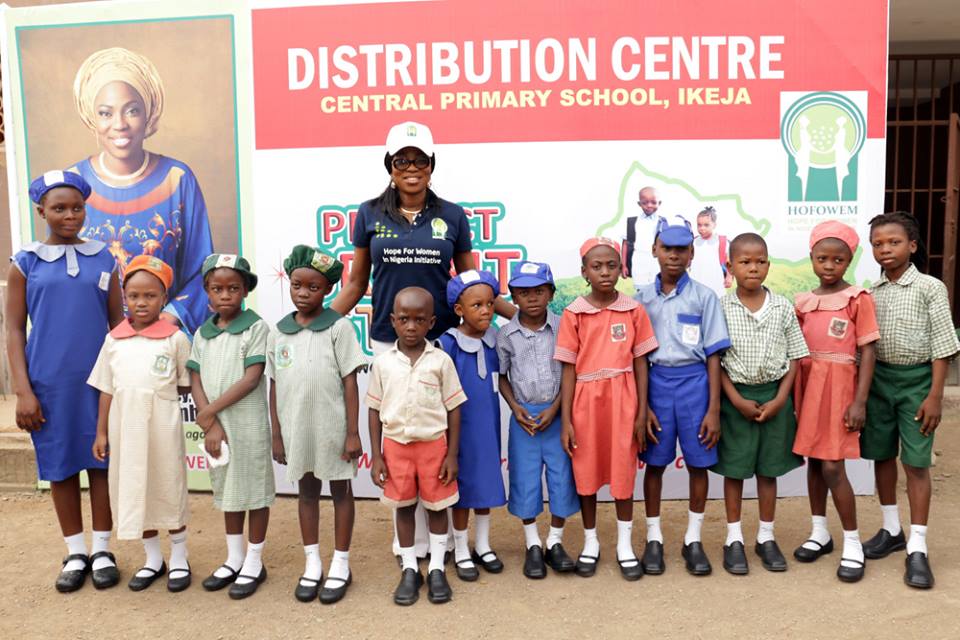 Wife of the Governor of Lagos State, Mrs. Bolanle Ambode, has renewed her call to parents and well-meaning Lagosians to pay adequate attention to the welfare of school pupils.

She made the call at Central Primary School, Oba Akinjobi Way Ikeja, one of the venues slated for the distribution of school shoes and socks to all pupils in primary 1-3 in Lagos public schools. The distribution is being done through her pet project, Hope for Women in Nigeria Initiative (HOFOWEM).

The Foundation had in September last year launched “Project Bright Steps” for public school pupils in Lagos State, during which Mrs. Ambode promised to distribute 175,000 school shoes and socks, to children in primary 1-3 in Lagos State public primary schools.
Addressing the media during the event, she said, “You remember that when we launched “Project Bright Steps” for school pupils in September last year, I promised that HOFOWEM will distribute socks and shoes to all pupils in primary 1-3 in Lagos State primary schools. The total being 175,000 pupils and the distribution is what we are doing in five centres across Lagos beginning from today.

Bolanle appealed to the pupils to listen attentively in class; dress neat and smart to school; read their books; obey and respect their teachers; always wash their hands and not join bad gangs. She prayed for God’s guidance and protection at all times.

Speaking further, the HOFOWEM founder, Mrs. Ambode, recalled that during the launch of the project, she had promised to make the distribution of shoes and socks to the pupils an annual event.

The First Lady emphasized that the project was motivated by her love for children and desire to see them decently kitted for school to boost their self-confidence and overall performance.

According to her, “Properly equipping our children for school plays a great role in boosting their confidence level, morale, concentration and overall performance.”

She reiterated that, it is our responsibility as a society to ensure our future leaders have all the support in preparing them to fulfill their purpose and emphasized that, wearing shoes is not a luxury, but a necessity.

Mrs. Ambode further promised that her foundation would continue to do all within its powers to put smiles on the faces of the pupils to compliment the efforts of the State government.