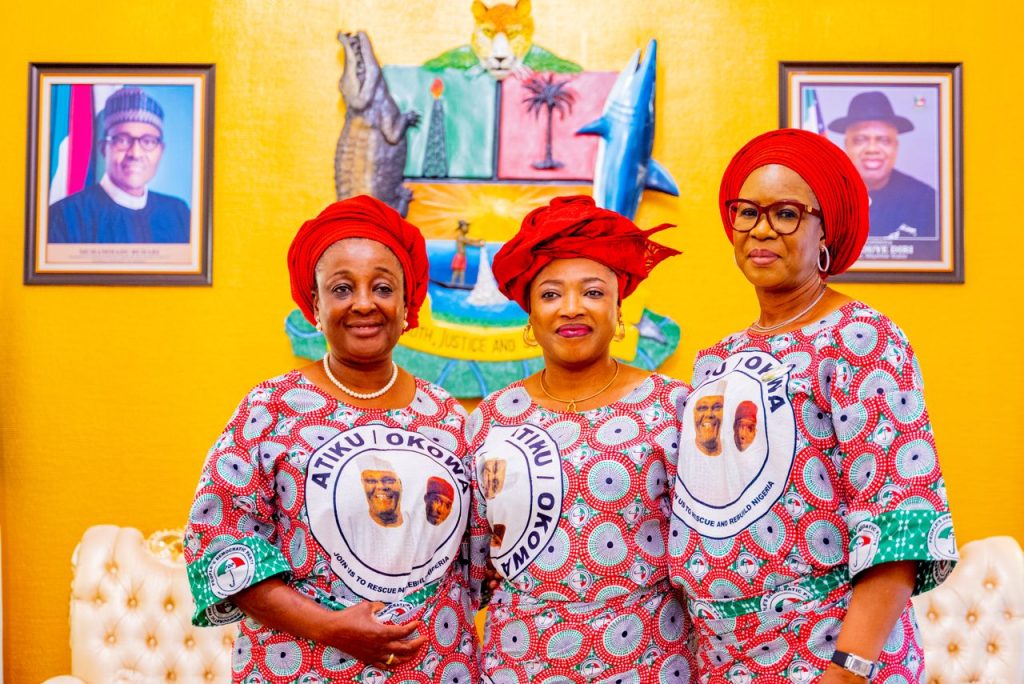 Nigerian women have been charged to be courageous and determined to rescue the nation by ensuring full participation in the forthcoming general elections.

The wife of the Delta State Governor and founder 05 Initiative, Dame Edith Okowa gave the charge while presenting food items and other relief materials to the flood victims in Bayelsa state.

The donation which was done in partnership with the Edo state Governors wife Mrs. Betsy Obaseki held at the state government house, Yenagoa the headquarters of Bayelsa.

Addressing the women who came out in their numbers, Dame Edith said Bayelsa State was worse hit in this year’s flood but God in his infinite mercy caused the flood to recede sooner than expected.

Dame Okowa explained that she and her Edo state counterpart decided to assist the Bayelsa state governor’s wife to reach out to flood victims in the state, to cushion the devastating effect on the people

While calling on Nigerian women to brace up in ensuring that the right leaders were elected in the 2023 elections, Dame reaffirmed that the Atiku/Okowa ticket would deliver the nation from the trenches and unite the people more.

She charged the women to remain fervent in praying for the good of Nigeria and support their fellow women to succeed, as Bayelsa had three female House of Assembly candidates of the People’s Democratic Party, PDP and another woman vying for Senate.

Also speaking, the wife of the Edo state Governor, Mrs. Betsy Obaseki said the donation was aimed at encouraging women that all hope is not lost. She urged them to give one hundred percent of their vote to PDP to change the narratives come 2022.

The host and wife of Bayelsa State governor, Dr. Gloria Diri commended Dame Okowa and Mrs. Obaseki for their unflinching support towards ameliorating their pains occasioned by the recent flood and reminded the women that Bayelsa belongs to PDP, urging all to support the party to emerge victorious.

In a goodwill message, the Bayelsa state commissioner for women and children Affairs, Honourable Faith Opene Orubo and the Special Adviser on Women in politics, Josephine Ekeuwei said women had good times, in the last dispensation of PDP but when APC came into power things became difficult. She however, expressed the hope that the pair of Atiku and Okowa would bring back the good old days where women were carried along.

Highpoint of the event was the presentation of the food items to the wife of the Bayelsa state Governor for onward distribution to the flood victims.

Some of the items donated include bags of rice, beans, garri, tubers of yam and mosquito nets.