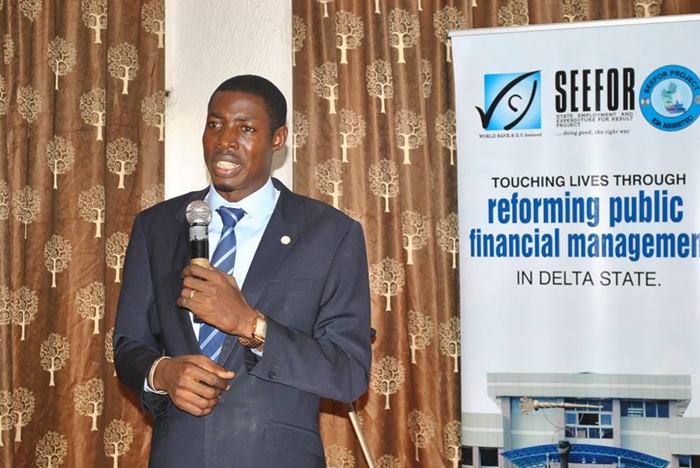 The Project Coordinator, State Employment and Expenditure For Results (SEEFOR), Delta State, Mr. Benson Ojoko has decried the poor management of the robust model of Waste Management system inherited by the Delta State Waste Management Board (DSWMB) from its agency, stating that there is now a downturn of service delivery by Private Sector Participants (PSP).

The Coordinator pointed out that, according to the project design, SEEFOR was to intervene for just one year and within that one year, they involved the activities of the executing agencies which in the case of the PSP, it was the Waste Management Board, the Ministry of Environment and the respective HODs of the 6 pilot local government areas.

In his words; “These people that we have mentioned, they were all part of the project from day one and to where we agreed on and they know from the onset that after one year according to the project design because if at all we are going to take over the statutory functions of government agency, just an intervention, a sign post to show a different way of approaching this challenge and if we have said yes to the three dimensions on board that I mentioned that we were meant to cover, then that is to be continued overtime.

“So what did we we do, prior to our exit as about September of 2015, we caused a memo to be written to his Excellency to say, look these are the structures that have made SEEFOR Project a success in this PSP model. His Excellency approved that sustainability memo and said let them also scale up the PSP intervention beyond the 6 pilot local government areas to non-pilot local government areas. So we started meetings and engagements with the chairmen and stakeholders and said this is the way we have run it to be successful, for instance, in the first Six Months we focused on service delivery and the second six months, there were some elements of enforcement. These were the structures that made the system work.

“We still went further to reconcile all the available balances and we were able to communicate to all the PSPs, saying up to this period, this is what has been accrued but for November/December period 2015, as at that time, the structure for taking over by the ministry that suppose to run it, was not in place. Then it was agreed in a meeting between all the PSP executives and the Commissioner for Finance that His Excellency directed that this thing should work. It was agreed that from the money saved, that SEEFOR Project should grant N200,000 to each of the PSP. So from that money even though when you check the report of some PSPs in some zones, they have not worked up to N20,000 or N50,000 in terms of people who have paid in the account but based on our collective way at making this system work, it was approved that from the sustainability pool of funds, we should leverage #200,000 for November and another #200,000 for December and we paid to all 160 PSPs. The records are there, they will not tell you that. Many of them did not earn half of what was given to than but as a way of supporting the system to work so that there is no gap.”

“Now it looks there is a difference in what it used to be when it was working under SEEFOR because we did alot of work. My staff do not sleep, we work even on Saturday, we had supervisors that were sending in their reports on a weekly basis from the zones and we had these reports distilled. We had a mechanism where people call in if they have not collected their wastes, we sanction the PSP to go pick up the waste. Somebody has to take that responsibility. We even had to go a step further to draft an MoU between the Waste Management Board and the PSPs because if as a government agency you have to supervise a set of people, there are laws – Delta State Waste Management Board law 2004 empowers them to supervise PSP structure across the state and there are sanctions.

Under the SEEFOR intervention, if you do not provide service, you are sanctioned, we even monitor them with Dump site report. We posted supervisors to dump sites who tell us on a monthly basis, the number of times a PSP has done its work. An internal control mechanism that everybody is accountable to one another and to make this system work. Many of these pillars of sustainability are not there any more and this is why we are seeing what we are seeing now.” The Project Coordinator stressed.