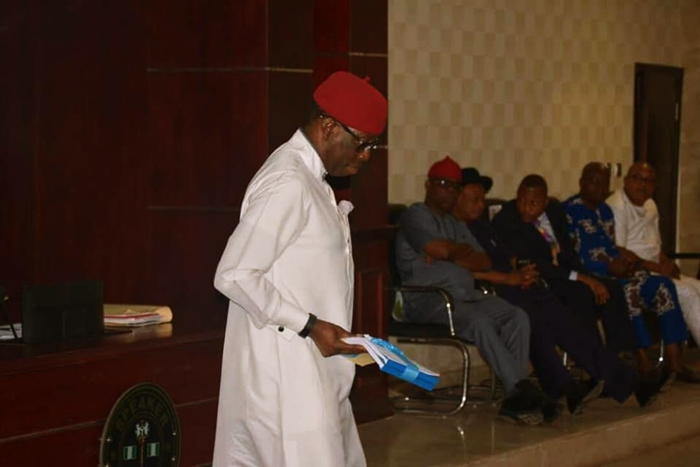 …As Finance Commissioner Reveals How N44.4 billion Windfall was Spent

The missive thrown at the Peoples Democratic Party (PDP) led government in Delta State and the Okowa administration by a former PDP National Leader and now All Progressive Congress (APC) Chieftain, Dr. Cairo Ojougboh, seems to have sent a strong kick on the butts of the present Government to act right in informing Deltans of how the State Resources is being utilized.

The call to action by the opposition party in the State came alive on Monday October 23, 2017 as Governor Ifeanyi Okowa sent his Economic and Finance Commissioners to parley journalists in the State on the performance of the 2017 budget and the expectations of the 2018 proposed budget.

Speaking at the enlarged post budget presentation briefing, the economic planning commissioner, Dr. Kingsley Emu who read the governor’s budget speech, however confirmed our earlier report that, Delta State will heavily rely on the Federal Government Allocation which makes up 59.73% of the proposed sources of revenue to fund the N298 billion 2018 budget.

In his words; “Some questions that may truly crop up given the breakdown that I have just made especially on revenue is, why is it not possible for us to fund our recurrent from our Internal Generated Revenue? It is not possible because we have not been programmed to do that for sometime and our recurrent expenditures are pretty huge… by and large, between statutory allocation and value added tax, we have an excess of 63%, which means that we must still continue to rely on the Federal Government’s allocation because that is how the economy has been structured.”

On how to boost the IGR of the State to meet some budget expenditures, Emu said machinery has been employed to reduce the recurrent expenditure of the State, saying that new products have been created under the IGR, blocking of leakages and the sanctioning of revenue agencies to turn in their receipts in order to revamp the flat revenue of the state.

Meanwhile, the Finance Commissioner, Mr. David Edevbie finally broke his silence on how the windfall and support from the Federal Government received by Delta State was expended. He stated that with the five successive quarters of recession experienced by the country, everyone was affected including the Federal Government and various approaches to ameliorate the harsh economy were floated which included the return of over-deduction from foreign loans and bailout funds.

According to Edevbie, “We have received N33.5 billion so far in terms of those refunds. The first tranche that we received was in December 2016 which was N14.4 billion, the second tranche that we received was in March 2017 that was roughly N8.9 billion and the third tranche we received in July was N10 billion. N7 billion of the refunds rightfully belongs to the Local Governments and was transferred to the Local Government Account. We spent N12.3 billion of the money on salaries and pensions and the remainder of about N14 billion was spent on capital projects.”

On the bailout funds by the Federal Government, the finance commissioner appreciated that despite Delta State being a PDP controlled State, it benefited from the APC led Federal Government benevolence. “As at 18th October 2017, the total amount that we have received in bailout funds is about N10.9 billion. We gave an interest free loan of N3.26 billion to the local governments to help with their salaries, we also paid N2bn in respect to outstanding commitments to pensions, we also paid N2 billion for primary school teachers salaries and we spent N3.5 billion on the payment of State salary arrears”.

On the controversial army of political appointees by the Okowa administration who constitute to the huge waste bill of the State, the Commissioner disclosed that there were 2,203 political appointees who are currently receiving N382 million monthly, while the salaries of 45,450 civil servants per month go for N4.9 billion.