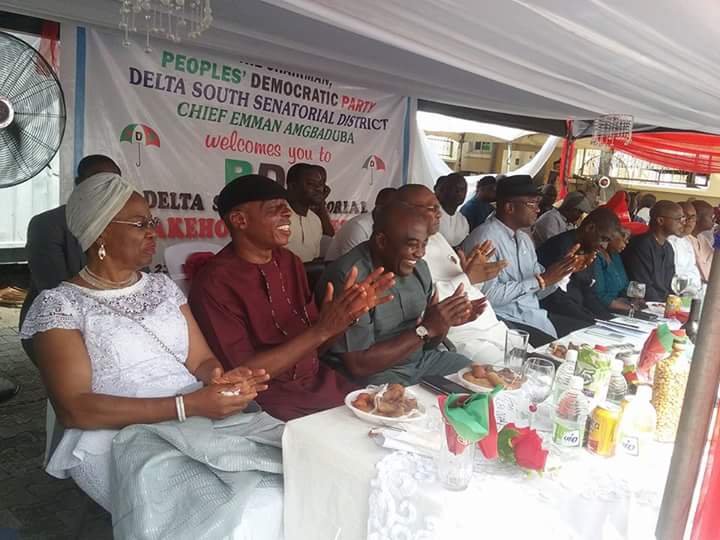 Otuaro had earlier conveyed Governor Okowa’s message of better times ahead and sued for patience at the well attended meeting of party leaders drawn from the Ijaw, Isoko, Itsekiri areas and parts of Urhobo nation in the state.

A member of the Board of Trustees of the PDP, Senator (Mrs.) Stella Omu, assured the gathering that a Strategic Review Committee set up by the party had identified what earlier divided the party and was now set to clinch victory in the polls ahead.

Also speaking, the incumbent senator representing the district, Senator James Manager and House of Representatives member from Isoko, Hon. Leo Ogor, said PDP has the cure to the problems bedeviling the country and tasked Nigerians to vote PDP to power in 2019.

The motion for the confidence vote was moved by Hon. Solomon Funkekeme and seconded by Hon (Mrs.) Felicia Orounagha, while the first Speaker of Delta State House of Assembly, Rt. Hon. Emmanuel Okoro, put the motion before members of the party, who returned a unanimous verdict.

The party said the confidence vote was occasioned by Governor Ifeanyi Okowa’s result-oriented performance despite the times it described as “financial holocaust”, stressing that his deputy, Barr. (Deacon) Kingsley Otuaro was a “highly supportive deputy and has proved a real ambassador of the district in Government House”.

Other speakers, including Dr. Pius Sinebe, Chief Emmanuel Okumagba and Chief Daniel Etaluku, advised aggrieved members of the party to sink their differences and work for the growth of the party towards regaining power at the national level in 2019.