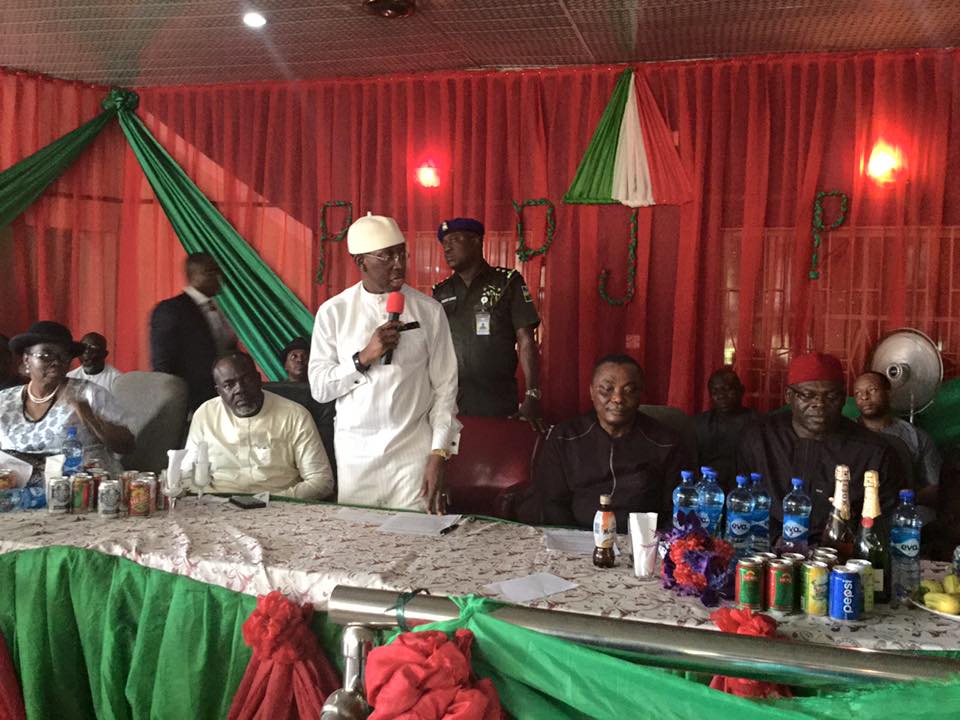 Governor Ifeanyi Okowa has taken a swipe at people who believes that the Peoples Democratic Party (PDP) is factionalized describing the purported faction led by Alhaji Modu Sheriff as spoilers.

The governor made the disclosure at a Delta North PDP Stakeholders Forum held on 2nd December, 2016 at Obiaruku, Ukwuani local government area of Delta State.

Addressing the party members, He said “People are talking about faction in PDP; if there is faction, can members of the faction call members of true PDP? PDP Senators, members of House of Representatives, all the governors and former governors are supporting Alhaji Ahmed Makarfi as recognized Caretaker Committee Chairman of the PDP, the Sheriff group are just playing the role of spoilers, but, don’t throw them away, provide enabling environment for them to be active in our party because, they are our brothers and sisters,” the governor said.

The governor decried politics of bitterness and thanked the Chairman of the PDP in Delta North, Hon. Moses Iduh for regular meeting of the party stating that chairmen of the party at the local government levels should hold regular monthly meetings which is compulsory for all political office holders to attend.

“The party is for everybody, nobody is above the party and there is no room for pride,” Governor Okowa said at the meeting which was attended by political office holders and elders of the party in the district.

He also warned political office holders against disparaging the government, asserting that those with political ambitions should avoid heating up the polity but, concentrate on selling themselves to the electorate.
Senator Okowa maintained that his administration would not encourage imposition of candidates on the people but, would abide by democratic norms.

Those who spoke at the meeting includes, Senator Peter Nwaoboshi, Hon, Nicholas Ossai of the House of Representatives, Commissioner for Information in the state, Mr Patrick Ukah, Chairmen of the party in all the local government areas in the district, among others praised Governor Okowa for the effective management of man and resources which has increased the fortunes of the party in the state.