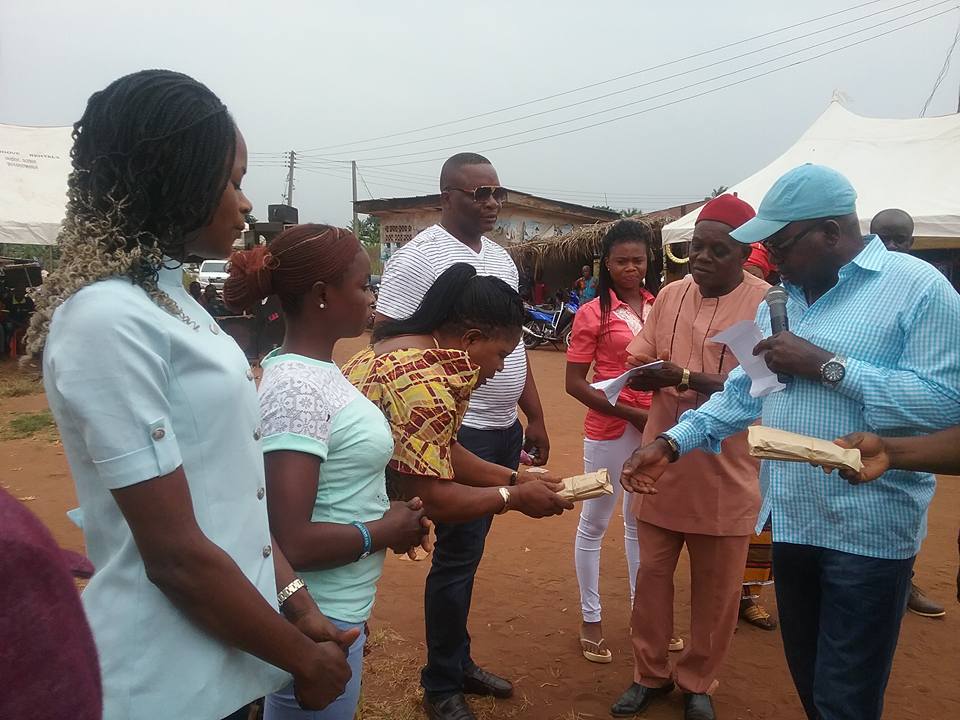 The leadership of the Peoples’ Democratic Party, PDP in Ika North-East Local Government Area ably led by Chief Godwin Ogadi has again empowered members of the party with cash sums to start up/ boost their businesses.

The party chairman in collaboration with Hon. Ifeanyi Eboigbe, the Director of Protocol to Gov. Okowa, have made it a routine to regularly empower party faithfuls in the area at every monthly meeting of the party.

Both party leaders today doled out seven hundred thousand naira for seven persons. The recipients who are to get one hundred thousand naira each include Obaka Anthony, Akporo Rosemary, Makonor Chidimma, Onyemaka Catholic, Emuebie Christiana, Eze Loveth and Azubuike Marvelous. He also gave the sum of five hundred thousand naira to the ward on behalf of the party. Handing the cash sums to the beneficiaries at Ute-Ogbeje, ward 13 today, thursday, 26 January 2017 in a well-attended gathering, chief Ogadi said the empowerment as always is to encourage members in the area in their collective resolve to ensure that the PDP remains unrivalled and unbeaten. He urged them to remain committed to the party and maintain their unalloyed support for the senator Ifeanyi Okowa-led government of Delta state. While also advising members to key into the numerous skills acquisition programmes of the present administration in the state, chief Ogadi said amidst fund paucity, His Excellency the governor of Delta state, senator Okowa remains committed to advancing the course of the people through meaningful and quality skills acquisition programmes in line with his SMART agenda which has the propensity of effecting a positive turn-around in the lives of the people when fully embraced. He urged them to avail themselves of the great opportunity presented by the programmes.

Speaking further, Chief Ogadi announced that in line with the skills acquisition issue, Mr. Sylvester Ukwandi , an illustrous son of Ute Ogbeje has taken it upon himself to help five youths in the area acquire skills for themselves. The five persons are Edo Aziken, James Okwuoke, Cyril Okafor, Nweke Paul and Augustina Onyemah. The named persons, according chief Ogadi will be sent to Sapele for training after which the government will give them starter packs and cash sums to start up their respective businesses in line with their areas of training. On behalf of Mr. Sylvester Ukwandi , chief Ogadi presented a cheque of one million naira to the ward .

The Ute-Ogbeje Community, while thanking the governor for appointing one of their sons, Mr. Okwuchi Jonathan as Special Assistant on Youths Development commended chief Ogadi, Hon. Ifeanyi Eboigbe and others for regularly empowering constituents and assured that ward 13 will remain a PDP community and continue to give 100% of their votes to the party in any election. They used the opportunity presented by the LGA PDP chairman’s visit to call the attention of the state government to help in constructing the road linking the community and Ute-Okpu which has been in deplorable state for many years.

The LGA PDP boss in his remark said he will align with the member representing Ika North-East Constituency in the State House of Assembly, Asaba and ensure that their requests are chanelled to the appropriate quarters for consideration. He assured their message will duly get to the governor for action as the said road is strategic and important. On his part, the member representing Ika North-East Constituency in the Delta State House of Assembly, Hon. Anthony Emeka Elekeokwuri said as a lawmaker, he will do everything humanly and politically possible required ensuring that the people feel the impact of governance. He said senator Okowa is a listening governor who will stop at nothing to put smiles on the faces of the people he serves.

The lawmaker while delivering his speech said as a Legislator representing them, he will not fail them. He said his office at the moment is sending graduates in the constituency abroad for further studies and urged constituents to key in. He also assured of providing classroom chairs to schools in Ute-Ogbeje within two weeks.