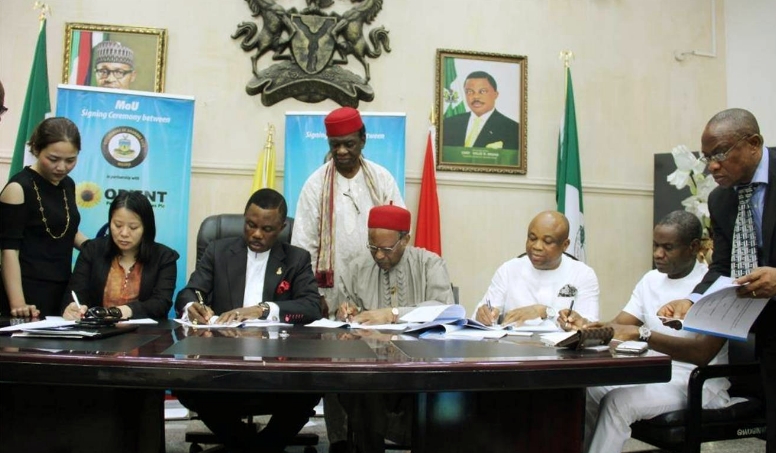 Anambra State Governor, Willie Obiano has signed a Memorandum of Understanding (MoU) that would ensure the immediate commencement of work on the proposed Umueri International Cargo Airport with a view to having the airport ready for use in three years.

The agreement which was signed between the Government of Anambra State, China Aviation, Orient Petroleum Resources Ltd and Elite International Investment Holdings Ltd is based on the Build-Operate-Manage-and-Transfer (BOMT) arrangement.

Following the successful agreement signing ceremony, Governor Obiano Tuesday April 11, 2017, flagged off construction work on the site designated for the airport in Umueri.

Below is an excerpt from governor Obiano’s speech during the flag off exercise of the Airport project;

“The project is estimated to cost over 2 billion US Dollars. It is a partnership between the Government of Anambra State, Orient Petroleum Resources Limited and Elite International Investments Limited (Sinoking Enterprises Limited).

Under the contractual agreement, Elite International Investments Limited will provide all the funds needed for the project under the Build-Operate-Manage-and-Transfer arrangement. However under the same SPV arrangement, the Anambra Airport City Infrastructure Limited has allocated 75% equity stake to Elite International Investments Limited, 20% to Oreint Petroleum Resources Limited and 5% to the Government of Anambra State. The host communities are entitled to 3% of the profit from this project in perpetuity as a part of the standard corporate social responsibility.

Indeed, the economic benefits of the Umueri Airport City Project are enormous. It is expected to generate 1,200 direct and 3600 indirect jobs. We expect that Ndi Anambra will grab 70% of these jobs in continuation of our efforts to create wealth and prosperity for our people. It will also provide an opportunity for training and skills transfer to our people. I have no doubts whatsoever that this project will have a tremendous impact on the ease of doing business in Anambra State as it opens a direct access by air to our vast markets. In particular, I hope that on completion, the Umueri Airport City Project will wipe out the difficulties our businessmen and women often encounter in exporting and importing goods and services and help in improving the entire supply chain.

Ladies and gentlemen, with this project and our subsequent plan for a light rail project, Anambra State will eventually assume its rightful place as a major commercial and industrial hub in the West African sub-region. As you are aware, my administration is intensely focused on building projects that have immense economic values. That is why we have concentrated efforts in building roads and bridges that either lead to industrial clusters or the oilfields or the agricultural belt of the state.

This Airport City Project follows the same trajectory. That is why we have established a strong synergy between Orient Petroleum Resources Plc and the Airport project with a view to operating an Aviation Fuel Segment that will attract both local and foreign airlines to refuel their aircraft in Umueri. This will no doubt open a new economic corridor for our beloved state as it is expected to stimulate growth in the oil and gas sector and multiply our revenue sources. It is my candid hope also that when this airport becomes operational, the world will have a direct and easy access to the vast tourism offerings of Ogbunike Cave and Ogbaukwu Caves and Waterfalls as well as the timeless archaeological treasures of Igboukwu!”

1. The project is actually an Airport City Model which will be developed as an integrated city comprising of an Airport with two standard runways, a shopping Mall, Industrial and Business parks and an Airport Motel.

2. The Airport will be located on 1500 hectares of land with enough headroom for expansion.

3. The Airport will be constructed under the Build-Operate-Manage-and-Transfer (BOMT) model.

4. 3% of the profit made from the Airport will be reserved for the host (Umueri) community.

4. When completed the airport will create 1200 direct jobs.

5. The airport is estimated to cost something in the region of $2bn.

6. The Airport project is to be completed in three years.