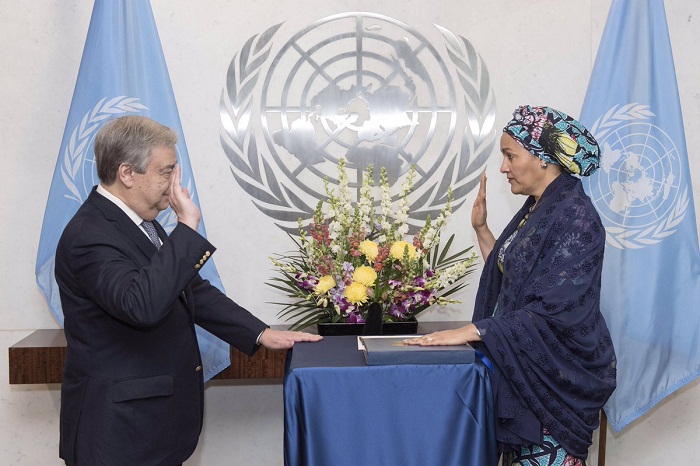 Ms. Amina J. Mohammed, Nigeria’s immediate past Minister of Environment, has been sworn-in as the fifth Deputy Secretary-General of the United Nations at the UN Headquarters in New York on Tuesday.

The Correspondent of the News Agency of Nigeria (NAN) in New York reports that the UN Secretary-General António Guterres administered the oath of office to Mohammed.

“I want to say that I am extremely, very, very proud that you accepted to join our team. Thank you very much,” Guterres told Mohammed.

NAN reports that the Deputy UN chief, after her swearing-in, immediately swung into action by declaring open the 2017 Economic and Social Council (ECOSOC) Segment on Operational Activities for Development.

Her speech at the ECOSOC event was her first official engagement, followed by a brief press encounter with the UN Correspondents.

She, however, delayed the assumption of her new role at the request of President Muhammadu Buhari to complete some ongoing responsibilities she was handling at that time.

As the fifth Deputy Secretary-General, Mohammed will help to manage the UN Secretariat operations, and “ensuring inter-sectoral and inter-institutional coherence of activities and programmes”.

She will also support the Secretary-General in elevating “the profile and leadership of the UN in the economic and social spheres, including further efforts to strengthen the UN as a leading centre for development policy and development assistance”.

In accepting the appointment, Mohammed had said she was humbled at the opportunity to serve humanity.

She added that “the opportunity and responsibility to serve people and planet as the next UN Deputy Secretary-General is truly humbling.

“I am most grateful for the confidence and trust demonstrated by the United Nations Secretary-General-designate António Guterres and President Muhammadu Buhari.

“The next phase of my continued service to the people of Nigeria at the global level, will certainly build on the rich insights and lessons drawn from engaging with leaders, colleagues and stakeholders across our beloved nation”.

She recalled her positions of responsibilities over the last three decades and her contributions to the Millennium Development Goals (MDGs), the Sustainable Development Goals (SDGs), and recently working for environment protection as part of Buhari administration’s vision to transform Nigeria.

NAN reports that Nigeria was represented at the swearing-in by the acting Charge d’Affaires of the Permanent Mission of Nigeria to the UN, Mr Anthony Bosah, while other family members and top UN officials also attended the ceremony.

She was instrumental in bringing about the 2030 Agenda for Sustainable Development, including the SDGs.

Before joining the UN, Mohammed worked for three successive administrations in Nigeria, serving as Special Adviser on MDGs.