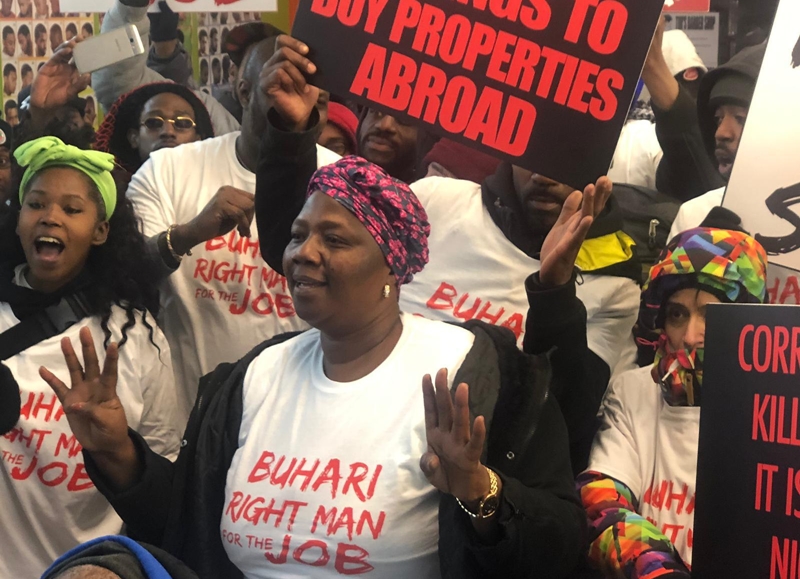 Barely 24 hours after some concerned Nigerians trooped out en mass in the United Kingdom to support President Muhammadu Buhari’s anti-corruption fight, their counterparts in the United States of America have followed suit.

These Nigerians, under the auspices of Restore Nigeria Coalition (RNC) were spotted in the streets of Washington, chanting ‘Sai Baba’ as they urged the Donald Trump-led government and the United Nations to support President Buhari in flushing out corruption.

Cosmas Collins, President of RNC, speaking on behalf of the group, believes Nigeria has made tremendous progress in the anti-corruption fight as witnessed in the case of embattled Chief Justice Walter Onnoghen.

“They are sufficing to note that since 2015, the present administration has initiated measures aimed at reducing corrupt practices in the conduct of government business at all tiers of governance. This effort has yielded positive results to the admiration of the bulk of Nigerians and the consternation of a select few that have benefited from the rot in the system,” he said.

“Undeterred, the government of President Muhammadu Buhari has carried on with enthusiasm and a determination to see that structural defects are fixed to curb the rot in the system for the betterment of Nigeria as a country.

“You may also wish to note that the bane of underdevelopment in Nigeria is as a result of the lackadaisical attitude of previous governments in the fight against corruption that has resulted in the wanton disregard for accountability and transparency in the conduct of government businesses and by extension governance in Nigeria.

“Since 2015 when the administration of President Muhammadu Buhari took over the affairs of the state in Nigeria, Nigeria has recorded tremendous progress in governance evident in the dividends of democracy trickling down the ladder.

“However, the present administration has encountered numerous challenges from individuals and organisations that have subverted the system through nefarious ways and means all in the quest to portray the Muhammadu Buhari administration in poor light in an attempt to pitch the populace against the government to fulfil their personal agenda of causing unrest and disaffection in the country.

“The recent case of the suspended Chief Justice of Nigeria, Walter Onnoghen who violated the law in declaring his assets as stipulated by the law has further emphasized the level of rot in the system.

“A particular segment of the Nigerian society has cried wolf where none exist and painted a picture of political persecution, forgetting that Nigeria was on the brinks of imminent collapse due the activities of a few that have benefitted from the rot in the system.

“We are through this medium soliciting for assistance from the United States and United Nation in the war against corruption in Nigeria as initiated by the administration of President Muhammadu Buhari in recent times.

“A vivid example can be seen in the instance where the Chief Judicial Official in Nigeria, either by omission or commission failed to declare a part of his assets running into millions of dollars.

“The Chief Justice of Nigeria as the number one judicial officer in the country for inexplicable reasons did not declare a part of his assets before the Code of Conduct Bureau in Nigeria. The CJN cited “forgetfulness and mistake” as the reasons for the non-declaration.

“The non-declared items are bank accounts with balances that runs into millions of pounds sterling and dollars.  This is too much to be right in our considered opinion. As the number one judicial officer in the country, it is wholly untenable for such an excuse, unless for deliberate reasons.”

Onnoghen: SHAC Provides US, UK Others with Perspective to ex-CJN’s Suspension
Okowa Rejoices With Osinbajo For Surviving Helicopter Crash
Advertisement