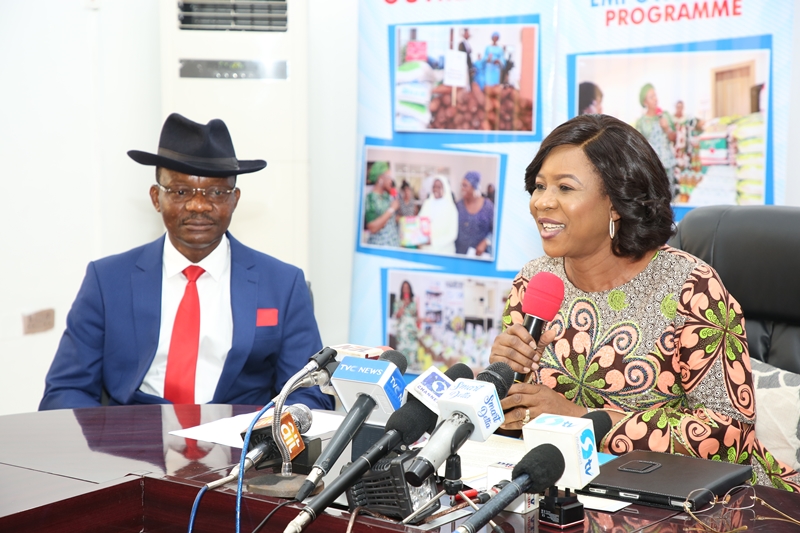 Following media buzz of financial grant up to the tune of $10 million given to O5 Initiative by The Initiative for Global Development (IGD), a U.S.-based Nonprofit Organisation, the Wife of the Delta State Governor and Founder of O5 Initiative, Dame Edith Okowa has publicly debunked the report, saying, “their only interest is centered on digitizing our sickle cell clinics”.

Dame Okowa at a press conference where she presented the outcome of her foundation’s advocacy on the management of sickle cell disorder in Delta State during a side event at the just concluded 74th session of United Nation General Assembly (UNGA), told journalists that, there was no financial commitment accorded O5 Initiative by IGD.

Flanked by the State Commissioner for Information, Mr Charles Aniagwu, top officials of O5 Initiative and her aides, the First Lady repeatedly maintained that her foundation has not signed any memorandum or received financial grant. “O5 Initiative is a registered NGO with the United Nations and its well recognized. Whatsoever we are doing, its not hidden. If my Initiative was given any money, I will be very glad but no money was given”.

“A major outcome of our UN presentation is the expressed desire of The Initiative for Global Development to partner with O5 Initiative. Their interest is centered on digitizing our sickle cell clinics across the State. This will generate critical data that will aid in the management of sickle cell patients. Although a formal agreement is yet to be signed regarding this partnership, we are confident that the digitization process will be a major boost to the operational efficiency of these clinics.” Okowa informed.

While thanking the press for the support given to O5 Initiative in the last four years which she said had helped to create public awareness of the programs and activities as well as attracted national and international attention, Dame Okowa reechoed the achievements of her foundation in feeding the hungry, providing shelter for the homeless, clothing the poor, caring for the sick and reaching out to prisoners.

“All these activities formed part of our presentation at the just concluded United Nations General Assembly. To the glory of God, our modest efforts in tackling the sickle cell disorder caught the interest of organizations and individuals who were motivated to do same in their respective countries. This has always been our yearning; that each and everyone of us will contribute our quota in order to change the world, one person at a time.”

ASABAMETRO in an earlier publication, reported that Dame Edith Okowa at a side event at UNGA74 in New York, had advocated a better life for people living with Sickle Cell, stressing the need for world leaders to create an enabling environment and support those with the disorder.

She told participants at Sickle Cell Anaemia awareness forum with the theme “Sickle Cell Disorder, the forgotten and the neglected: Any hope for the children?” to join her foundation in the battle against Sickle Cell and secure a bright future for persons already living with the disorder. “There is too much stigma related with Sickle cell disorder. Come join us in combatting sickle cell.” Dame Okowa advocated.

It will be recalled that on June 1, 2019, the O5 Initiative project of Dame Edith Okowa donated a Multi Million Naira Sickle Cell Referral Centre to the Delta State Government. The centre which is located in the Asaba Specialist Hospital, is currently catering for Sickle Cell patients within and outside Delta State and also serves as the headquarters of other Sickle Cell Micro Clinics spread across the State.