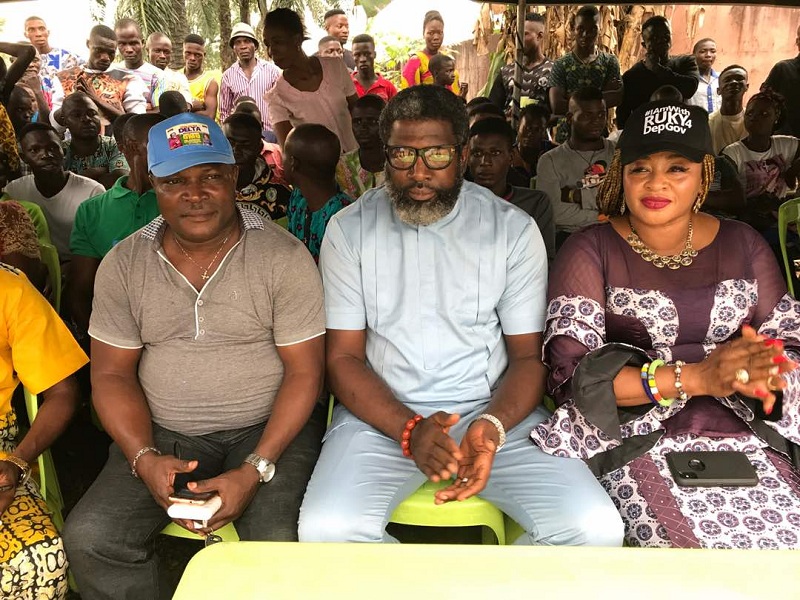 The candidates of All Grand Alliance Party, AGAP in the 2nd March 2019 governorship election in Delta State have promised to provide quality leadership that would move the state forward.

Speaking at Uwheru in Ughelli North, the AGAP governorship candidate, Chief Brando Omu and his running mate, Dr (Mrs) Rukevwe Ugwumba, assured of unprecedented development across the state if given the opportunity to serve as governor and deputy governor of the oil rich state.

Addressing party leaders, faithfuls and supporters ahead of the Saturday 26 January 2019 flag off of state-wide-campaign for the general elections, Chief Omu and Dr Ugwumba in their separate remarks, affirmed their readiness to fix Delta State for effective governance.

The AGAP standard bearer, Chief Brando Omu said a new Delta State would emerge under his leadership, stressing that he would create wealth for the people and grow the state’s infrastructure to sustain all round development.

Chief Omu, a renowned Accountant, asserted that no matter how remote, his government would reach out to the needs of every community in the state, maintaining that he was in the race to build a state that would remain outstanding and an envy of other states. He expressed optimism on a massive support of the people, saying that victory was sure for the party.

“Our vision to fix Delta state is an onerous task that can only be achieved through a collaborative pursuit. This comprehensive plan to Fix Delta is anchored on the motto of the All Grand Alliance Party, AGAP,  “Prosperity For ALL”. Omu stressed”.

For her part, Dr Rukevwe Ugwumba, a Medical Doctor, philanthropist and consultant to the Senate Committee on Health, said she was joining forces with Chief Omu and others leaders in AGAP to usher in new narratives befitting for a state like Delta.

Dr Ugwumba stated that they were prepared to serve hence the need for the support of Deltans with their votes for a greater and more prosperous Delta State.

She assured that they will never disappoint the people.

Party leaders who spoke including the State Chairman of the Party, Chief Alex Oyoro said AGAP would bring positive changes to the state.

They said the party was prepared for the election, noting that they were reaching out to Deltans for massive support and their votes during the polls.

The party leaders acknowledged the qualities of their candidates and said they have bright prospects of winning the elections.

The ceremony was witnessed by mammoth crowd made up of elders, women and youths who pledged their total commitment to supporting a daughter of the kingdom to emerge as Deputy Governor of the Delta State.