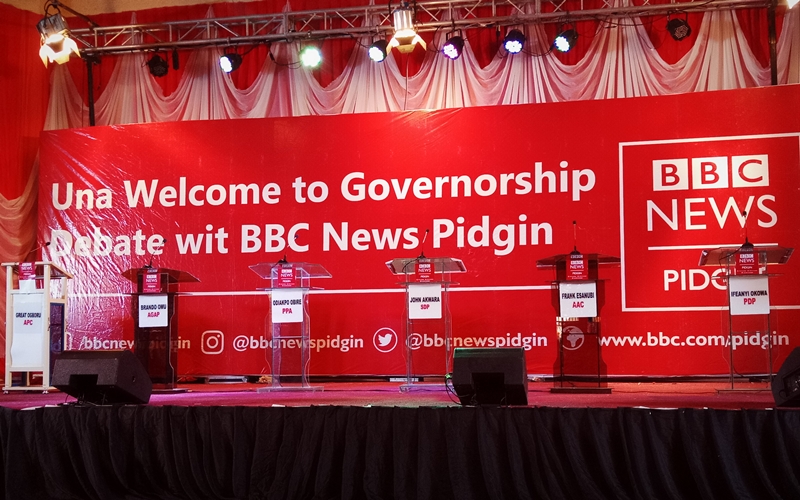 Hundreds of observers and participants who throng the venue of the Governorship Debate organized by BBC News Pidgin for the gubernatorial candidates for Delta State in the March 2, 2019 election, were disappointed as some of the candidates shunned the platform.

Six out of the 50 governorship candidates contesting for the exalted seat in Delta State had been invited for the BBC Pidgin gubernatorial debate, held at Orchid Hotel, Asaba on Thursday, February 7, 2019.

The debate put together by BBC Media Action, had the candidates of the All Grand Alliance Party (AGAP), Brando Omu; Progressive Peoples Alliance (PPA), Odiakpo Obire and African Action Congress (AAC), Frank Esanubi in attendance who reeled out their party’s policies and programmes for Deltans if elected.

Unraveling the reasons why the candidates of the Peoples Democratic Party (PDP), Ifeanyi Okowa; All Progressives Congress (APC), Great Ogboru and Social Democratic Party (SDP), John Akwara, BBC News Pidgin explained that the aides to Governor Ifeanyi Okowa were not forth coming on the position of the PDP Candidate in confirming his attendance.

They further explained that the APC candidate, Great Ogboru never replied to the letter and other inquires sent to him, while John Akwara of SDP, failed to reach a successful compromise with the organizers.

“Dem begin do turn-turn on top who go confam weda im go come or not.

“All di letters, text message and calls to di All Progressives Congress APC candidate, Chief Great Ogboru no receive any response weda yes or no.

“Even sef di letter, calls and text message to di pipo wey dey close to am like im broda, Turner Ogboru and Sen. Omo-Agege too no yield any result as im sef no show up for di debate.

“Even though say im be answer di first letter dem wey invite am for di debate, come even ask wia di venue of di debate go hold because say im bin no dey Asaba, but e no answer any call or text message to confam weda or not e don enta Asaba and e no show for di debate venue last last.”

It would be recalled that, on January 4, 2019 at the Flag Off of his gubernatorial Campaigns for a second term at the Oghara Township Stadium, Governor Ifeanyi Okowa had challenged the candidate of the APC, Great Ogboru to a debate.

In Okowa’s words, “I offer myself for debate because, it is not enough for All Progressive Congress (APC) candidate to come out and say he wants to be governor and relying on thugs or run to Lagos after every election.”

However, both candidates failed to participate in the debate put together by BBC Pidgin Debate for Delta gubernatorial candidates for the 2019 election.

Primate Okoh Calls For Credible Elections As Obi, Okowa Urges Christians To Be Actively Involved In Politics
Okowa Fires Aide for Violent Behaviour and Assault On a Lady
Advertisement