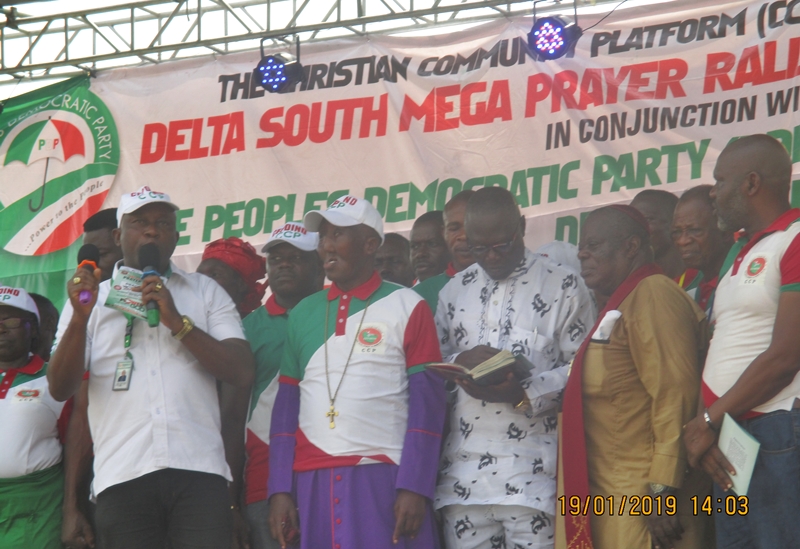 …Okowa Has the Capacity for Second Term – CAN President

Christian communities in Delta South Senatorial District, under the aegis of The Christian Community Platform, (CCP), has given their backing to the presidential candidates of the Peoples Democratic party, PDP, Alhaji Atiku Abubakar, the Delta state Governor, Senator Ifeanyi Okowa, and other candidates of the party in the forthcoming national elections in the country.

The endorsement was given during a one day mega prayer rally for a peaceful and victorious election, held at Centre School, Oleh, on Saturday January 19, 2019.

Speaking during the event, which had, “Power Belongs to God”, as its theme, Nigerians, especially the Christian communities were asked to be involved in politics, as it’s the only way, bad governance can be checked. They were asked to jettison the idea that politics is for those who are ready to play dirty games, but rather that politics is for everyone, who want good governance, security, proper development and prosperity for every man and woman.

Speaking during the rally the chairman, Christian Association of Nigeria, CAN, Senior Apostle Sylvanus Okorote, commended the Delta State Governor, Senator Ifeanyi Okowa, and called on all Deltans who love good things to return him for a second term to continue with his development initiative, as he said he has the capacity for a second term.

“We cannot deny the fact, Senator Ifeanyi Okowa had done well, with his development agenda, and this can be attested with evidences in the area of infrastructural development, human capacity and security supports. Based on these factors, it’s a proven fact that he has the capacity for a second term, which will usher in full prosperity for all Deltans”. He said.

The CAN president stressed the fact that, the 2019 election, goes beyond electing new leaders in the state and Nigeria in general, but also an election to vote out insecurity in the country.

“If we want peace in Nigeria, even development, then we should be ready to vote out insecurity.”

Also speaking, the Chairman BOT of the body, and the Executive Assistant to the governor on Religious Matters, Bishop Greatman Nmalagu, said the body is supporting Senator Ifeanyi Okowa, and the Peoples Democratic Party, PDP, because the party has good governance as its manifesto, which can be attested in the state.

“CCP is standing for the candidates of the PDP, so that the good governance and development in the state will continue.”

He called on the opposition to put aside any plan to rig the election or cause problem in the state during the election, as it will not end well with the party, the planners, and executioners.

“All the plans of the opposition to rig the forthcoming election in any form, will not work, as God will stand behind the PDP during and after the election.”

On his part, the President of the Christian Community Platform, CPP, Rev. Dr. Cyril Okonye in an interview, stated that the group was formed to encourage Christians to participate in politics, and one of the basic requirements to be a member, is to have the Permanent Voters Card, PVC, he urged Christians to come into politics as it will be the only way they can add their voices to the governance of the state and Nigeria.

He stated that the group decided to back the candidates of the PDP in the state, as it is the only party that will guaranty peace, development of the people. He however stated that the rally for the governor and all PDP candidates is a sign of covenant with the candidates, to ensure that that good governance is delivered when elected.

“PDP is the only party that will guarantee peace and development of the people of the state. That is while we are endorsing the candidates of the party, starting from the presidential candidate. However, this supports and rally is a covenant we just signed with them, that when they finally win, the dividend of democracy must get to the people, including the Christian community.” He stressed.

The Delta South senatorial Chairman, of the PDP, Chief Emma Amgbaduba, thanked the members of CCP for the rally, and said the endorsement of all the parties’ candidates shows that the party is the only true party in the state.

The senatorial chairman stated that the PDP in the state is not intimidated by what the opposition had called an intimidating crowd at the just flag off rally in Warri, as he exuded the confidence of victory for the party come February and March this year. He called on people of Delta south to get their PVC, vote and protect their votes.

“I am very confident of our victory. I only urge my people to get their PVC ready, go out and vote and protect their votes after voting.”

The Deputy Governor, Deacon Burutu Otuaro, speaking through his representatives, Rev. Felami James said that for the past four years, Nigerians had been in pain, and this is the time to get it right, by voting the right persons, and party at all level, which is the Peoples Democratic Party, and all its candidates.

The mega rally was spiced up with word of God from Appostle, Dr. Tseye Okotie, who admonished Christians not to go back to Egypt, but voting out hunger, and suffering in the land.

Earlier in their welcome addresses, the state Secretary of CCP, Apostle Jonathan Afesuka, and the Woman leader, Mrs Happy Nwachukwu, had called on members of the CCP to ensure victory for all candidates of the PDP in their respective wards, by mobilizing Christians to get their PVC and votes on that day.

Prayers were offered on behalf of the state governor, the PDP families, the Independent Electoral Commission, INEC, Security agencies, the electorate, against selling and buying of PVC, the state and the nation.

The rally witnessed in attendance the representatives of all candidates of the PDP in Delta South, members of CCP from all local government in the senatorial district, those from Delta central.