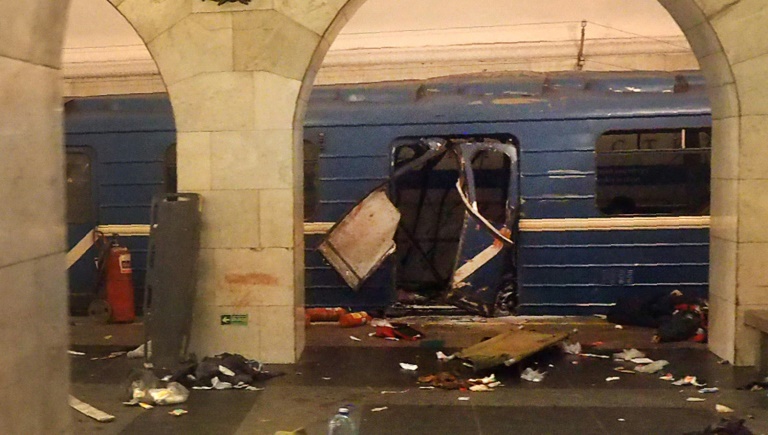 Russian authorities Tuesday confirmed a suicide bomber was responsible for the metro blast that killed 14 people in Saint Petersburg, as the city began three days of mourning.

Flags flew at half-mast in Russia’s second city and flowers and candles piled up at an impromptu memorial outside the metro station rocked by the attack, as authorities beefed up security on the busy underground transport system.

The Kremlin said the bombing was “a challenge to every Russian”, including President Vladimir Putin, after Kyrgyzstan said earlier that one of their natives had staged the blast.

Russian investigators said they had “established that the explosive device could have been activated by a man whose fragmented remains were discovered in the third carriage” of the train.

It was not immediately clear whether he was counted in the official death toll.

Meanwhile, commuters travelled to work under an anxious cloud after Monday’s bombing, which forced the entire metro system — seen as the lifeblood of the city — to shut down temporarily.

“Everyone in the metro can only think of this,” said 45-year-old Svetlana Golubeva as she entered the underground.

The bombing raised jitters coming just over a year before Russia is due to host the Football World Cup in venues including Saint Petersburg.

And throughout the city, there was a sense of shock that terror could strike their city that had seemed far from being a target — unlike Paris, Berlin or London.

Even attacks in Moscow “seemed far away from us,” said Dmitry Leonov as he picked his way through the candles and flower tributes lining the gates of the station.

“Now we’re all under threat,” he said.

Putin, who was born in Saint Petersburg, had on Monday added his own floral tribute to the dead.

Kremlin spokesman Dmitry Peskov said: “The fact that the act of terror was perpetrated in the moment that the head of state was in the city is food for thought.”

Kyrgyz security services said Tuesday the attack was staged by a suicide bomber identified as Akbarjon Djalilov, a naturalised Russian citizen born in southern Kyrgyzstan in 1995.

Russian authorities have not commented on the alleged bomber’s identity though investigators said it was known, and there has not been a claim of responsibility.

The explosion came after the Islamic State group called for attacks on Russia in retribution for its military intervention in Syria against the jihadists.