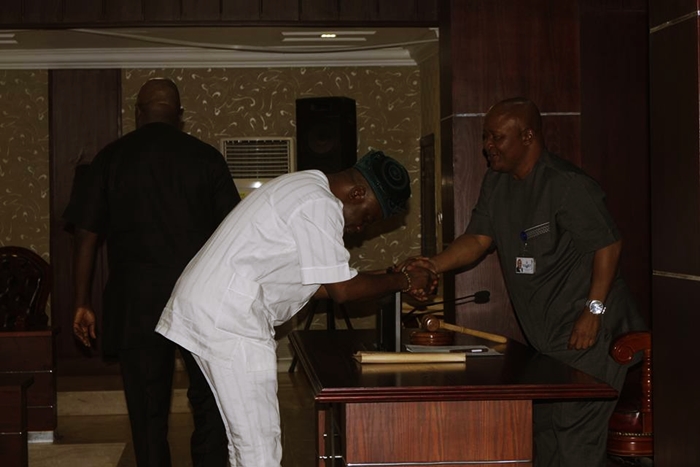 His defection was announced at the floor of the House during today’s plenary session.

The letter of his defection was read by the Speaker of the House, Rt. Hon. Monday Igbuya and was thereafter introduced to fellow PDP honourable members of the House by the Majority Leader of the House, Hon. Tim Owhofere.

The reasons for his defection was properly documented and made available to ASABA METRO.

NOTICE OF DEFECTION FROM LABOUR PARTY TO PEOPLES DEMOCRATIC PARTY.

Mr Speaker, I am pleased to inform you and the Honourable House of my decision to switch my allegiance and membership from the Labour Party to the People’s Democratic Party. My decision is informed by the unresolved leadership crisis and factional divisions in the Labour Party affecting the National Working Committee/National Executive Council. This imbroglio, have deprived the Party of the much-needed synergy required to deliver the dividends of democracy to my Constituents at this material time.

In view of the Proviso to Section 109 (1g) of the Constitution of the Federal Republic of Nigeria, 1999 (as amended) and after an extensive consultation with leaders and members of my Constituents at all levels, a collective decision was made to switch to the right platform capable of and suitable for the actualisation of the socio-economic and political goals of my people. I took this decision because I put the interest of my people first and because it is a people oriented decision, I have the full support, encouragement and backing of the leaders and members of my constituent.

Mr Speaker; Honourable Colleagues, I and the good people of Ethiope East Constituency have found the People’s Democratic Party to be that suitable platform, not only for Ethiope East but for the entire Delta State and the whole of Nigeria.

In coming to this decision, I could not have chosen the ruling party at the National Level because of that party’s known inability to secure the life and property of my Constituents who are daily annihilated and are now living under the constant horror and fear of herdsmen that have been wreaking havoc against my people. Of course, in addition to the pervading issues of insecurity are the myriads of poor economic policies under that party’s watch which has made life very unbearable for my constituents in the last 22 months.

I, therefore on behalf of myself and the dynamic people of Ethiope East, declare my total and unalloyed support and loyalty for the Peoples Democratic Party, (PDP), the effective and resourceful leadership and government of Senator Dr. Arthur Ifeanyichikwu Okowa, Governor of Delta State and the Legislative Agenda of the Delta State House of Assembly under the indefatigable leadership of Rt. Hon. Monday Ovwigho Igbuya, Speaker of the Delta State Hose of Assembly.”

Hon. Ivwurie is a vibrant and active member of the Sixth Assembly. He is the Chairman of the House Committee on Agriculture and Natural Resources and members of numerous committee.