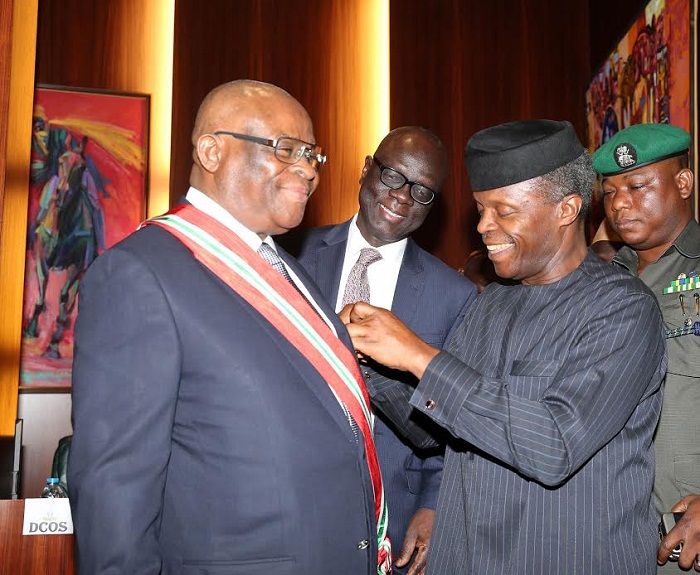 Justice Walter Onnoghen was today sworn-in as the 20th Chief Justice of Nigeria by the Acting President, Professor Yemi Osinbajo. Onnoghen was immediately awarded and decorated as Grand Commander of Order of the Niger (GCON).

Grand Commander of Order of the Niger (GCON) is Nigeria’s second highest award.

The inauguration was witnessed by the Senate President, Bukola Saraki, former Chief justices of Nigeria, Ministers, Justices of the Supreme Court and other dignitaries.

The swearing-in ceremony was conducted inside the council chambers of Aso Rock presidential villa, Abuja.

Walter Onnoghen, a native of Cross River state, was first appointed by President Muhammadu Buhari as acting CJN on November 10, 2016 after the retirement of former CJN, Mahmoud Mohammed.

Acting President Osinbajo returned his name to the Nigerian Senate for confirmation as substantive CJN on February 8.

The Senate screened and confirmed him on March 1.

Prof. Osinbajo said President Muhammadu Buhari had asked him to let the new CJN know that he was assuming office at a time “when all arms of government suffers from loss of confidence from the people”.

He also said Mr. Buhari expressed the belief that the tenure of the new CJN will help revive and sustain the people’s confidence.

Osinbajo said it was time to show Nigerians that the choice they made in bringing in the administration was the right one.

The new CJN had earlier pledged his loyalty to the Federal Republic of Nigeria.

He pledged to continue to keep to his oath of office and solicited the cooperation of all Nigerians.

Onnoghen said the key to achieving good governance in Nigeria lies in respecting the rule of law.

“To Nigerians who had kept the faith, some have even fasted, I say a big thank you,” he said.

The event was witnessed by Mr. Onnoghen’s family, Senate President Bukola Saraki, former CJN Mohammed Mahmud, Justices of the Supreme Court and other divisions, as well as Ministers.