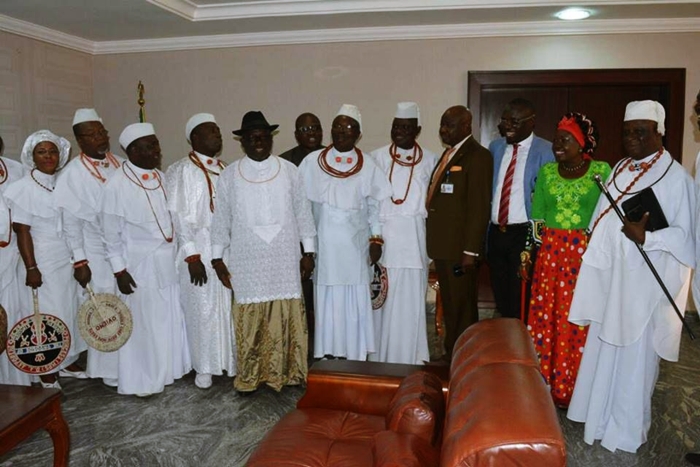 Speaker of the Delta State Assembly, Rt. Hon. Sheriff Oborevwori was today honoured by Uvwie Kingdom as members of the Uvwie Traditional Council paid him a courtesy visit to felicitate with him on his emergence as Speaker.

The delegation led by the Unuevworo of Alegbo, High Chief Hope Akasa, had a retinue of chiefs who were on the tour to do a congratulatory bidding on behalf of His Royal Majesty, Emmanuel Sideso, Abe 1, The Ovie R’ Uvwie of Uvwie Kingdom.

Receiving the delegation in his office at the Assembly Complex, Speaker Oborevwori who was all clouded with happiness expressed his deepest gratitude to the His Royal Majesty Emmanuel Sideso for the honour shown him.

In his words, “Let me sincerely thank the delegation from His Royal Majesty Emmanuel Sideso for coming to congratulate me on my emergence as the Speaker of the Delta State House of Assembly. This is a great show of love, it shows that they still remember me in Uvwie. The story of my life will not be complete if Uvwie is not mentioned.”

The Speaker marveled at the respect accorded him by the Traditional Council as they left their abode to come felicitate with him. “As you people have come today, I will reciprocate this visit. I will come and pay homage to his royal majesty.”

Receiving the prayers of His Royal Majesty, Emmanuel Sideso, Abe 1, Oborevwori implored Traditional Rulers to continually pray for Government Officials noting that “we need prayers from our Royal Majesties to succeed because the House of Assembly need prayers so that we would be able to do the right thing that will positively impart on Deltans. We are not here to serve ourselves, we are representing all the constituencies in this state.”

Earlier, the Usiavwie of Ekpan, High Chief Otomiewo who spoke on behalf of the group said, they were on an assignment from the Ovie R’ Uvwie of Uvwie Kingdom to Speaker Sheriff Oborevwori with a message of congratulations on his new position.

“His Royal Majesty, His Royal Majesty, Emmanuel Sideso, Abe 1, The Ovie R’ Uvwie of Uvwie Kingdom, on behalf of the entire Knigdom has sent us here as emissaries of Grace to formerly felicitate with you and thank the almighty God for elevating you to the position of the Speaker of Delta State House of Assembly. He is praying that God should give you wisdom to pilot the affairs of not only this House but of the state, the local government and of everybody.

Prayers were also offered for Honourable members who accompanied the Speaker to receive the Uvwie delegation.